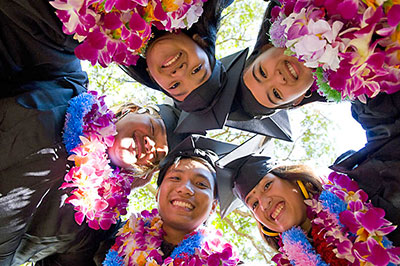 GEAR UP Hawaiʻi will be hosting a series of webinars to help thousands of island families prepare for college as part of the National GEAR UP Week 2022, starting September 26.

GEAR UP Hawaiʻi has successfully helped tens of thousands of Hawaiʻi’s low-income middle and high school students to enter and succeed in higher education for more than 20 years.

GEAR UP is funded by the U.S. Department of Education and administered in Hawaiʻi by UH through Hawaiʻi P–20 Partnerships for Education. Since its inception in 1999, GEAR UP has improved educational outcomes for millions of low-income students across the U.S.

To commemorate the week, several webinars will be held:

Visit the GEAR UP Hawaiʻi website to register for the events or for more information.

Each year, GEAR UP Hawaiʻi serves more than 10,000 low-income students statewide in grades seven through 12 and through their first year in college at UH campuses. Through a partnership with the Hawaiʻi State Department of Education and the UH System, as well as, government, nonprofit and private sectors, GEAR UP Hawaiʻiprovides information, encouragement, support, resources and services to help eliminate achievement gaps among groups traditionally underrepresented in higher education.

“National GEAR UP Week is a time to highlight the accomplishments of our program, as well as provide additional support for students and families,” said Angela Jackson, GEAR UP program director and associate director of Hawaiʻi P-20 Partnerships for Education. “To be part of a national effort which inspires hopes and dreams that college is possible is something worth celebrating.”