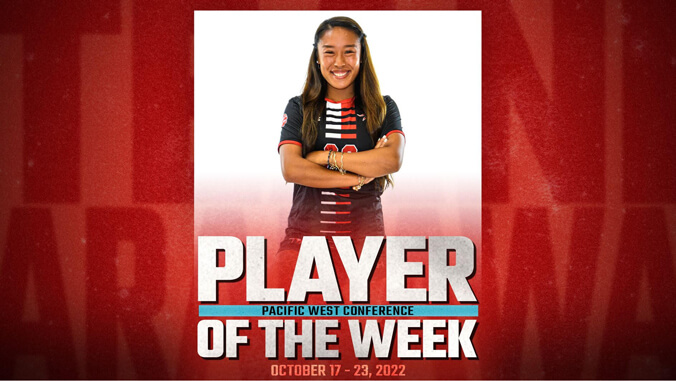 University of Hawaiʻi at Hilo women’s soccer player Teani Arakawa was named PacWest Player of the Week after accounting for nearly half of the Vulcans’ goals in the week of October 17–23. As a team, the Vulcans also received Team of the Week recognition.

Arakawa got UH Hilo on the scoreboard in the 42nd minute in a 4-0 win over Holy Names University on October 18. She also assisted on the third goal in that match. In a 3-0 victory against Biola University on October 22, she netted another two goals. Arakawa totaled seven points for the entire week.

“Staying on my mark, making runs, flanking the center back—pretty much just trying to work together, making plays and scoring,” said Arakawa, regarding her focus heading into the matches.

The sophomore ranks No. 4 on the team in points and is tied with two other Vulcans for No. 2 in goals on the season.

PacWest Team of the Week

Daelenn Tokunaga scored twice against Holy Names and also scored the first goal of the match against Biola, less than two minutes into the match.

Throughout the season, the Vulcans have outscored their opponents 35-4.