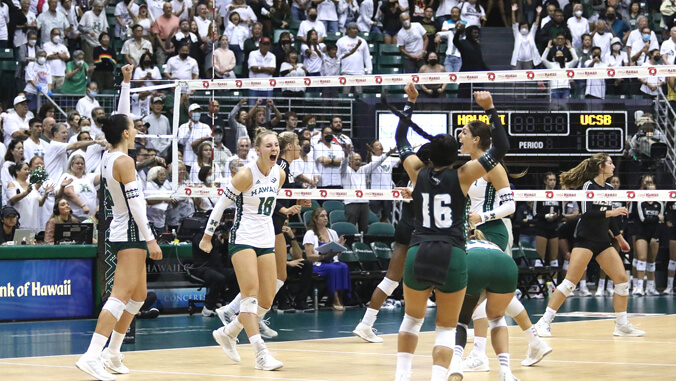 The University of Hawaiʻi at Mānoa women’s volleyball team claimed first place alone atop the Big West Conference Standings after a four-set victory over UC Santa Barbara (UCSB) 25-21, 20-25, 25-18 and 25-22. The Rainbow Wahine were tied with UCSB and Cal Poly going into the match on October 22, however, UH’s win and Cal Poly’s loss to UC Irvine vaulted the ‘Bows into the top spot with 10 matches remaining in the regular season.

Juniors Riley Wagoner and Amber Igiede combined for 30 of UH‘s 54 kills and Kendra Ham recorded a career-high 18 digs and put down the final kill to end the match.

Wagoner was a catalyst in the win, leading the Rainbow Wahine with her fourth double-double of the season with 17 kills and 13 digs. She hit just shy of .300 with three errors on 48 swings for a .292 hitting percentage. It marked her 12th double-digit kill match and her fifth 10+ dig match of the season.

Igiede’s 13 kills contributed to her 16th-straight double-digit kill match. She was in on four blocks and tied her season-high with eight digs.

Ham recorded nine of her 18 digs in the fourth set alone. It was her second straight match with double-digit digs and the sixth of the season. She has posted more than 10 digs in three of the last four matches.

Kate Lang also finished one dig shy of a double-double with 41 assists and nine digs. She also had a pair of aces and tied her season-high with three blocks.

With this win, the Rainbow Wahine are now at 11-6 overall and 9-1 Big West play.

This week, the team will travel to California to take on UC Riverside on October 27 and UC Davis on October 29.

For a full game recap and more, visit hawaiiathletics.com.