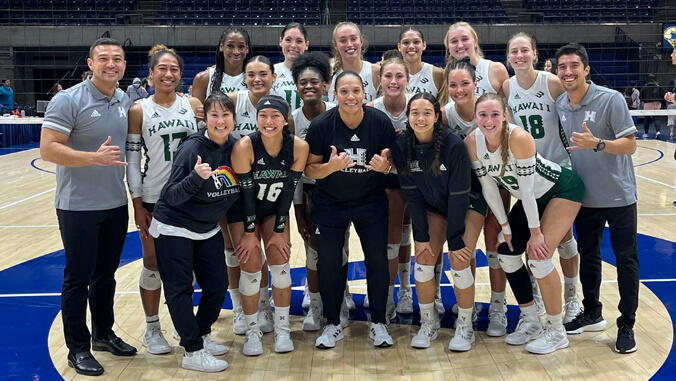 The University of Hawaiʻi at Mānoa women’s volleyball team (14-6, 11-1 BW) battled back and held off University of California, Davis to win in five sets, 16-25, 25-12, 28-26, 19-25 and 15-9 on Saturday, October 29 on the road in Northern California. The victory saw several milestones for the Rainbow Wahine as UH head coach Robyn Ah Mow recorded her 100th career win; Amber Igiede put down her 800th career kill and Riley Wagoner picked up her 600th career kill towards the end of the fifth set.

Ah Mow improved her overall record to 100-35 and in conference raised her mark to 71-9. She is the second Rainbow Wahine head coach to record 100 wins at Hawaiʻi.

Junior middle blocker Igiede put down a career-high 24 kills and hit .432 (24-8-37) to lead the ‘Bows. In the fifth set she pounded her 800th career kill. It marked her 18th-straight 10+ kill match and was tied with UC Davis’ Josephine Ough with a match-high seven blocks. She also had three digs and a service ace.

Freshman outside hitter Caylen Alexander tied her career high with 18 kills while hitting .385 (18-3-39). It was Alexander’s 11th double-digit kill match. She was a bright spot in the first set, putting down five kills in the frame.

It marked Wagoner’s seventh double digit dig match as she tallied 11 for the match to go with her five kills. Her fifth kill in the match allowed her to reach 600 career kills.

For more on the game go to hawaiiathletics.com.

The Rainbow Wahine returns to the SimpliFi Arena at Stan Sheriff Center to take on Long Beach State on Friday, November 4 and face Cal State Fullerton on Saturday, November 5. Both matches are slated to start at 7 p.m.