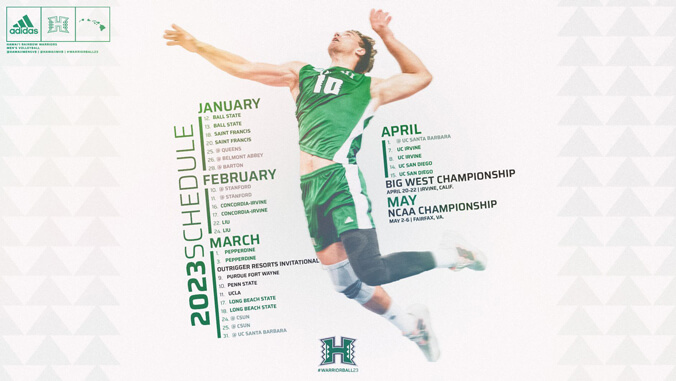 The Rainbow Warriors will play 19 home matches at SimpliFi Arena at Stan Sheriff Center, opening with Ball State, January 12–13 in a rematch of last year’s national semifinals. UH rallied past the Cardinals in five sets to advance to the title match against Long Beach State (LBSU), whom the Warriors will host March 17–18 to open Big West play.

In addition, national semifinalist UCLA will headline the 27th Outrigger Resorts Invitational, which returns for the first time since 2020. Also making up the field is longtime Outrigger participant Penn State, along with Purdue Fort Wayne. The three-day tournament runs March 9–11.

After the LBSU series, UH will spend the next two weeks on the road at CSUN (March 24–25) and at UC Santa Barbara (March 31–April 1) before returning to host UC Irvine (April 7–8) and UC San Diego (April 14–15) in the final two weeks of the regular season.

Season tickets for the 2023 season will go on sale next month.

For more to to hawaiiathletics.com.