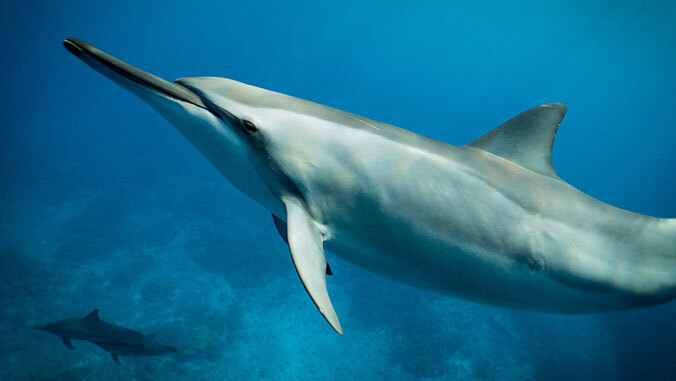 Two spinner dolphins died from toxoplasmosis after becoming infected with the parasite Toxoplasma gondii, according to researchers at the University of Hawaiʻi at Mānoa Health and Stranding Lab. One dolphin was stranded on Hawaiʻi Island in 2015 and the other on Oʻahu in 2019.

Invasive species such as pigs, mongoose, chickens and cats harbor the parasite, but it is unclear which genotypes are most likely to infect wildlife species. The findings were published in Diseases of Aquatic Organisms.

UH researchers screened archived tissues from past dolphin and whale strandings and did not find the parasite in any animals except those that died of it. This demonstrates that if a spinner dolphin has a severe toxoplasmosis infection they will die.

“We suspect that many more spinner dolphins may succumb to toxoplasmosis and die than the animals that are recovered dead and examined for cause of death,” said Kristi West, associate researcher at UH Mānoa’s Hawaiʻi Institute of Marine Biology who directs the UH Health and Stranding Lab. “A better understanding of toxoplasmosis infections and infectious cycles is important to developing effective conservation strategies for protected and endangered Hawaiian wildlife.”

Toxoplasmosis is found globally infecting warm-blooded animals and humans. The parasite reproduces in the digestive system of cats, which shed the oocytes (eggs) in their feces. Oocytes are resistant to environmental conditions and remain viable for up to two years and may be washed out to sea in runoff where they infect monk seals, dolphins and whales. Researchers presume that marine animals most likely ingest the oocytes through contaminated water or prey.

UH researchers performed necropsies, collected tissue samples for microscopic inspection and used molecular tools to test for the presence of infectious pathogens. They discovered that the strain of toxoplasmosis that infected both spinner dolphins is Toxoplasma gondii genotype 24. This same genotype was identified in feral pigs on Oʻahu in 2020 and described in previous studies from bobcats in Missouri, and chickens in Costa Rica and Brazil.

The research shows how land and sea are connected, and that the parasite Toxoplasma gondii that reproduces on land can spread to animals that live an entirely aquatic existence in the ocean.

Marine mammals are culturally significant to the people of Hawaiʻi and are recognized sentinels of ocean health. Toxoplasmosis has been identified in a number of Hawaiian native species and causes serious disease or death in monk seals, spinner dolphins, and birds such as the ʻalalā (Hawaiian crow).

“Spinner dolphins in Hawaiʻi are small island associated populations that spend part of their daily routine in nearshore waters,” said West. “We need to understand the causes of mortality and the threats that Hawaiʻi’s dolphins face to better protect these species.”

The public can help reduce the spread of toxoplasmosis through responsible cat ownership by spaying/neutering cats, keeping cats exclusively indoors, and reporting any illegal dumping of cats or kittens outdoors into feral colonies.

A significant challenge is that marine mammal carcass recovery rates are very low, which emphasizes the importance of the public’s role in rapid reporting of dolphin and whale strandings and the value of thoroughly examining every carcass. Sightings of dead or distressed marine mammals can be reported to the toll-free statewide NOAA Marine Wildlife Hotline at 1(888) 256-9840.