A fascination for capturing “people of different cultures living their everyday lives” is what inspires the work of University of Hawaiʻi videographer Jeff DePonte. A call for submissions from International Lens Magazine for its “Culture” issue led him to submit his street photography taken during a 2014 trip to Phnom Penh, the capital city of Cambodia. DePonte’s work along with nine other international photographers were selected and featured in the October 2022 issue of the fine arts photography publication. 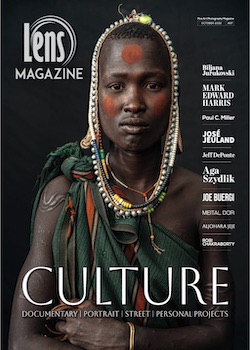 “Seeing my name up there next to people I have admired is really what is so humbling,” said DePonte, who has been with the UH Office of Communications since 2015.

With scenes from Japan, India, Kenya and Cambodia, the 171-page glossy spotlights a collection of unique projects focusing on ancient cultures and civilizations from around the globe. DePonte’s 14-page photo spread titled “Streets Without Borders,” features 20 black and white square photographs taken during his nine-day trip and third visit to Phnom Penh. DePonte was there as part of a documentary film project featuring the Future Light Orphanage and its founder Nuon Phaly.

“I adopted a set of constraints that would define the work: one camera, one lens, black and white, square,” he wrote in his artist statement. “Working as a photojournalist in Phnom Penh gave me a new frame of reference. Social humanist photography is the same, whether cinema verité or stills.”

Seeing the extraordinary in the ordinary

With his trusty Fuji X100 camera in hand, DePonte fully immersed himself in the city, taking photographs of the people everywhere he went.

“The act of photographing on the street helps me see the extraordinary in the ordinary, helps me to more fully experience a place,” he said.

The Phnom Penh images include barefoot children on the streets and at the market, a motorcycle delivery, jewelers at work, an elder woman smiling for the camera, Buddhist monks gathered at the Royal Palace and ladies working in the rice fields—DePonte’s favorite in the collection.

“You can see a range of emotions in their faces (laughing, confusion, etc.),” he reflected. “As a street photographer, I had to emote something that says ‘I respect you’ without being off-putting.”

DePonte said, “Experiencing a place as poor as Cambodia will make you question the things you take for granted back home in your own comfort zone. I find it invigorating to observe the cultures of foreign lands. Photography can help to make us question what is normal and routine, while depicting ingenuity and resourcefulness that is universal.”

DePonte has been a videographer with the UH Office of Communications for seven years, and has captured numerous stories for UH News about the amazing people and programs across the UH System.

“I love situations where we go and are more or less part of the action, not just reporting but being involved in the story,” he said.

DePonte has more than 40 years of experience in photography and video production under his belt. He’s worked on various freelance photography and film projects, and in multiple areas at KGMB–TV, from community relations to writer/producer/director, for 30 years. He was also co-founder and president of Pipeline Digital, Hawaii, a software company specializing in the control of videotape decks that had partnerships with multiple big name tech companies.

He credits his mentor and Kamehameha Schools’ longtime photo archivist the late Luryier “Pop” Diamond for “greatly influencing” his photography, when he was a high school student and then as a colleague. DePonte took over his mentor’s position at Kamehameha Schools upon his retirement in the 80s and was able to work alongside him for a few years.