For the last half century, the University of Hawaiʻi at Mānoa has taught thousands of students the art of the Japanese tea ceremony inside a traditional tea house. The structure sits under sprawling trees within the picturesque East-West Center Japanese Garden, where you can hear the faint sound of a bubbling koi pond. The zen-like atmosphere helps to put students into a meditative mindset before entering Jaku’an, the name of the Japanese tea house, which means the “hut of tranquility.”

The time-honored structure was erected in 1972, after Genshitsu Sen, a 15th generation grand tea master, commissioned the building of a chashitsu (authentic tea ceremony house) in Hawaiʻi. First constructed in Japan and reassembled in Hawaiʻi, Sen donated the structure to UH in an effort to carry out his life’s mission of fostering peace through the teaching of tea ceremony.

“The tea house is tranquil and separates us from our busy daily life, which allows us to self-reflect,” said Akiko Ono, a UH Mānoa instructor who teaches the Way of Tea practicum course. “Through this beautiful art form, we learn to remain humble and be respectful to nature and one another.”

The UH Mānoa has offered the way of tea ceremony courses since the 1970s, enabling students to study the deeply respected practice and its role in the history and culture of Japan. Ono worked alongside the late Urasenke tea ceremony instructor Yoshibumi Ogawa, who mentored UH Mānoa students inside the tatami (straw mat) lined structure for more than 40 years. Ono has since picked up the torch, passing down Ogawa’s knowledge and the deeply-layered tradition of Japanese tea.

“In tea gatherings, you see hospitality expressed in so many ways through so many things,” Ono explained. “I would like my students to take notice of the small things around them even if they seem insignificant at first, and learn to use their five senses thoroughly to appreciate what they experience every day.”

Gay Satsuma, associate director at the Center for Japanese Studies fondly recalls taking the campus’ Way of Tea in Japanese History and Culture course as an undergraduate student in the mid-1980’s. 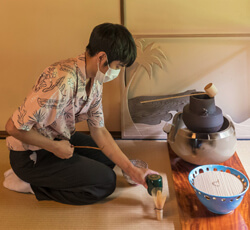 “It was a wonderful experience to learn in an authentic tea house,” said Satsuma. “At that time, I had not yet visited Japan so that experience in Jaku’an was like a window into the culture.”

In 2015, Jaku’an celebrated a reopening after undergoing renovations funded by Sen.

CJS is part of the UH Mānoa School of Pacific & Asian Studies in the College of Arts, Languages & Letters.

For more information go to the Way of Tea Center website.