The University of Hawaiʻi women’s soccer team has received its largest-ever gift, $50,000 from an old friend of the Rainbow Wahine team’s head coach.

Coach Bud, as Nagamine is known, had reached out to Shin earlier this year to ask if he would give to the Title IX 50th anniversary effort—UH raised a total of more than $700,000 for women’s athletics over the course of three events in September and October.

Nagamine has known Shin for more than 30 years. He was just starting his business in Hawaiʻi when she came home from college on the mainland, and the two played soccer within the same circle of friends.

“He was a very industrious, hardworking man,” she said of Shin, who started his construction company in 1990. “I remember him coming to the field in construction clothes.”

Shin’s gift is unrestricted, and Nagamine said it will support several different areas—from providing healthy snacks and nutrition guidelines to the team to making sure players are able to attend summer school, if needed.

“I’m excited by what this kind of support signifies for our university,” she said. “It’s nice to see that people in the community have the 360-vision of what we’re trying to do as a program.”

The coach is also interested in starting up a mentoring program—matching her team members with youth programs to get elementary school kids interested early in college.

“I think our athletes here at UH are excellent role models for the younger generation,” Nagamine said. “That’s going to pay dividends for both our players and the children they inspire. It’s really important for our student athletes to understand that when they play for UH, they play for the whole state.”

Nan Inc. has supported other UH programs. In 2020, Nan Inc. donated $160,000 to fund scholarships at the UH Mānoa College of Engineering.

The company.was founded in Honolulu in 1990 by Shin, stemming from the modest dream of a young entrepreneur hoping to help Hawaiʻi build its future. Nan Inc. has grown to become the state’s largest locally owned and operated general contractor, with the capacity and expertise to execute the most complex projects, specializing in preconstruction, general contracting and design-build services. 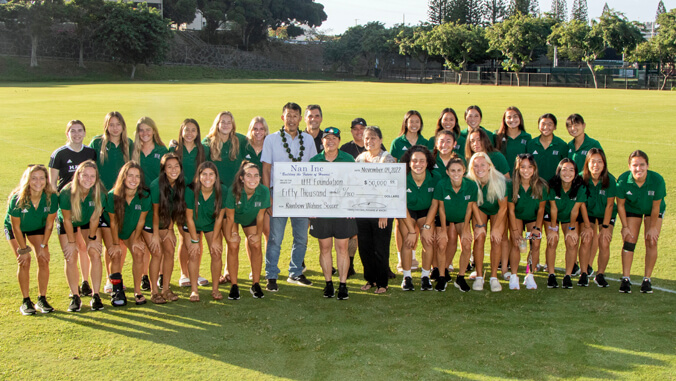