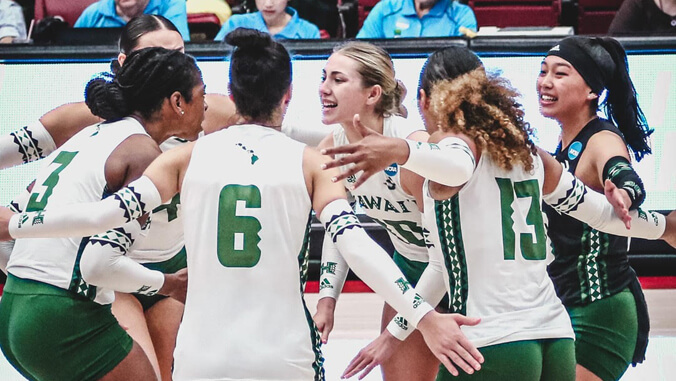 Three Rainbow Wahine recorded 15-plus kills, and four recorded double-digit digs, but it was not quite enough to claim a win. The loss snapped the Rainbow Wahine’s 12-match winning streak and marked just the fifth time UH has lost in the first round in 40 appearances in the NCAA Tournament.

Riley Wagoner led the way with 20 kills and tied her career-high with 17 digs to record her eighth double-double of the season. The junior tallied her 700th career kill while becoming the first Rainbow Wahine player to record 20 kills in an NCAA Tournament match since Nikki Taylor in 2016.

Amber Igiede added 16 kills and four blocks for her eighth straight match and 27th on the season with double-digit kills. In the third set, she recorded her 400th career block.

Caylen Alexander also reached double digits in kills for the 16th time this year, finishing with 15.

On defense, joining Wagoner with 10-plus kills were Tayli Ikenaga who tied her season high with 18 digs, Kendra Ham with 12 digs and setter Kate Lang who tallied her ninth double-double of the season with 47 assists and 10 digs.

The Rainbow Wahine started off strong, winning the first set. UH started at a 9-5 lead,but LSU. scored five of six points to overtake the ‘Bows, 11-10. Back-to-back kills by Alexander sparked UH as the team see-sawed back in front. LSU claimed back the lead and held it at 17-16. With Ham serving, UH went on a five-point scoring run to leapfrog past LSU, 21-17. LSU staved off two set points, but Alexander pounded her fifth kill as UH won set 1, 25-21. In the frame, Wagoner led UH with six kills while Alexander hit .625 in her NCAA tourney debut on eight errorless swings. The ‘Bows ultimately fell to LSU in the remaining three sets.

For a full game recap and more, visit hawaiiathletics.com.