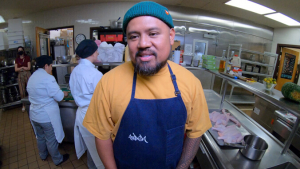 The Culinary Institute of the Pacific at Kapiʻolani CC hosted the visit by Lam in collaboration with NPR to tape an episode of The Splendid Table in front of a live audience at the Hawaiʻi Theatre.

Simeon, who was a featured guest at the taping, owns and operates Tin Roof on Maui. He competed on season 10 of Top Chef, won the coveted “Fan Favorite” title and finished as a finalist. He attended Leeward CC and graduated from UH Maui College.

“The most important thing, I think, is a deep connection to the ingredients and that everyone has their own food story, and it’s up to them to tell that story,” Simeon said. 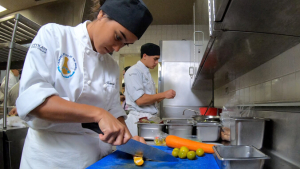 “Thereʻs no such thing as ‘authentic,’” said culinary student Chloe Herbert, following Simeonʻs talk to the class. “I think he really shows that in his book that Hawaiʻi cuisine comes from all different walks of life from all different cultures and different things like that and how in tune he is with nature—it’s really inspiring to see somebody so close to nature and food.”

“You donʻt have to be a storyteller through your food, but that is one thing that [Simeon] has taken on himself to really showcase.” said Lam. “Thatʻs something that I want the students of today and the chefs of tomorrow to really understand—that you have that power.”

Lam’s and Simeon’s visit at Kapiʻolani CC concluded with a group lunch featuring the dishes they cooked together and a talk-story session.

Simeon also had a message for the community: “Go out there and support local restaurants, so that these students have a place to go on after culinary school.” 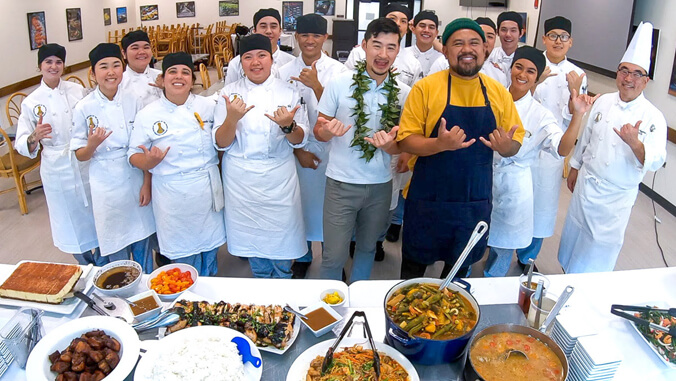