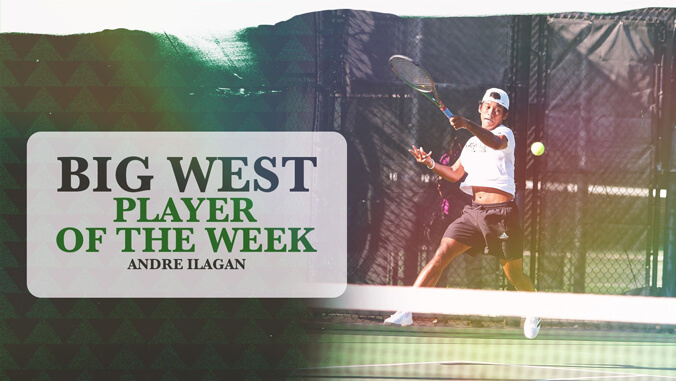 The Rainbow Warriors started the season with a challenging schedule with dual matches against No. 16 Florida State University and No. 20 Duke University sandwiching the single-day, Hawaiʻi Invitational tournament, which included Duke and UCLA. He opened with a three-set, super tie-breaker loss to FSU’s 12th-ranked Antoine Cornut-Charuvinc. Ilagan bounced back to down Duke’s 84th-ranked Pedro Rodenas in straight sets, 6-1, 6-4. He finished the homestand falling to the Blue Devils’ fourth-ranked Garrett Johns, 6-2, 7-5.

In doubles, Ilagan and partner Karl Collins went 2-1 for the weekend. UH’s No. 1 duo began by knocking off the Seminoles’ Cornut-Charuvinc and Barnaby Smith by a break, 6-4. The pair then defeated UCLA’s Lucas Magnaudet and Ryder Jackson, 6-3 before falling to Duke’s 49th-ranked Michael Heller and Andrew Zhang, 6-2.

Ilagan has earned a Big West Player of the Week award in each of his five seasons (including 2020 which was shortened due to COVID-19). He continues to have the most Big West weekly awards for the Rainbow Warriors.