Office of the Vice President for Research and Innovation

University of Hawaii President David Lassner told a group of scientists, academics, defense officials and contractors Friday that the university’s foray into astronomy and space surveillance began at the summit of Haleakala, before Science City was established and before telescopes atop Mauna Kea.

In 1956, UH built a roll-off roof observatory to house the Smithsonian Baker-Nunn Schmidt satellite tracking camera, he said on the final day of the Advanced Maui Optical and Space Surveillance Technologies Conference at the Wailea Beach Marriott Resort & Spa. That was seven years before UH leased the summit for what is currently the Maui Space Surveillance Complex.

The telescopes at Haleakala and atop Mauna Kea attracted astronomers to Maui and the Big Island, he said. They “sort of looked across and said, ‘Hmm, that bigger mountain over there looks like it would be good for astronomy,”’ Lassner said. 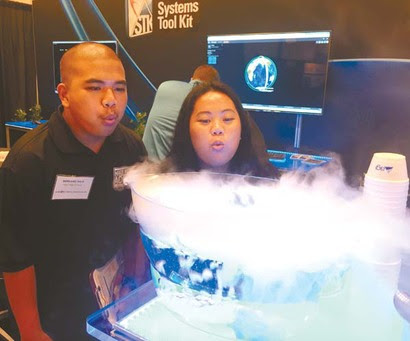 The Hilo community lobbied then-Gov. John Burns to develop Mauna Kea into the “massive global enterprise” it is today, he said.

“We have a constellation of some of the best telescopes in the world, and we have received our fair share of attention over there (atop Mauna Kea) these days,” Lassner said, drawing a reaction from the crowd.

He was referring to Native Hawaiian protests over construction of the $1.4 billion Thirty Meter Telescope atop Mauna Kea, which protesters consider a scared place. Demonstrators have blocked the road leading to the summit and put up rock altars, or ahu. The state Supreme Court is considering an appeal of permits granted for the construction of the telescope.

Protests on the Big Island have triggered demonstrations on Maui, where the Daniel K. Inouye Solar Telescope is being built atop Haleakala. Wide-load convoys up the 10,000-foot mountain have faced protesters, more than 20 of whom have been arrested, this summer.

When asked about the protests of the Inouye telescope, Lassner said in a phone interview Friday, after returning to Oahu from the conference, that he believes “we all have to find ways to work together through our existing legal and regulatory systems to resolve hard problems, for which this is one.”

“And I will add personally,” he said, “I do believe that scientific causes and cultural uses can coexist in a mutually synergistic environment on our mountains.

“The university is committed to responsible stewardship of our mountains and nurturing that synergistic scientific uses and cultural uses.”

In his address to the conference, Lassner listed Maui astronomy accomplishments, including the ongoing work with another telescope with which UH is affiliated, Pan-STARRS. The telescope, developed by UH and with parts built by the university at its Maui facility, tracks near-Earth objects that threaten or may threaten the planet.

Terabytes of information are generated each night, analyzed and distributed around the world. Ten institutions in four countries are part of the Pan-STARRS consortium, he said.

Lassner also had a shout out for the UH Institute for Astronomy’s Stuart Jefferies, who has developed algorithms to improve images from satellites and has brought in nearly $8 million from the Department of Defense for his work.

The UH president spent the majority of his speech discussing two UH Board of Regents initiatives to increase Hawaii’s post-secondary graduation rates for associate, bachelor and graduate degrees and an initiative to help build the state’s third billion-dollar economic sector, after tourism and direct military spending.

That third sector would involve research and innovation, he said. UH is working with private and government sectors on this initiative. “We think that is really achievable,” he said.

UH has been building on its existing strengths – oceanography, marine science, energy, Asia Pacific studies and astronomy – while moving into health sciences, “where we have some real advantages with one of the most ethnically diverse populations in the world,” sustainable agriculture and data science.

Some 65 percent of jobs in 2020 in Hawaii will require more than a high school diploma, Lassner said. Currently, only 44 percent of working-age adults have a post-secondary degree.

“It’s clearly not where we have to be,” he said.

The AMOS Conference, presented by the Maui Economic Development Board, is the premier event in the nation devoted to space surveillance, which includes tracking of space debris. There were 540 attendees from the U.S., Japan, Korea, Australia, China, Italy, Germany, France, Spain and Switzerland.

“We experienced a significant increase in international participation this year reflecting the international significance of tracking space objects and debris to protect commercial and military assets in space,” said Jeanne Skog, president and CEO of MEDB.

“The AMOS Conference is the sole venue where that issue is discussed in depth and participants can depend on interacting with key players from government, both civilian and military, industry, NGOs (nongovernmental organizations) and academia.”

AMOS is run by the Air Force Research Labs and has 3.6-meter and 1.6-meter telescopes. Keith Knox with the USAF Research Labs, in following Lassner to the stage, touted state-of-the-art research being conducted at Haleakala.

A first-of-a-kind relay mirror experiment was successfully conducted at AMOS, where a laser from the ground bounced off a mirror on a satellite and was recorded back on the ground. He added that algorithms developed at Haleakala are being built into space-based surveillance satellites.

* Lee Imada can be reached at leeimada@mauinews.com.