The Department of Second Language Studies is actively working toward fulfilling the minimum funding level of the Craig Chaudron Endowed Memorial Fund. Please consider donating to this effort.

The purpose of the Craig Chaudron Memorial Fund is to assist the Department of Second Language Studies at the University of Hawai'i at Mānoa College of Languages, Linguistics, and Literature in funding activities and efforts related to, and such as, attracting distinguished visitors, enhancing student experiences, and increasing community outreach. 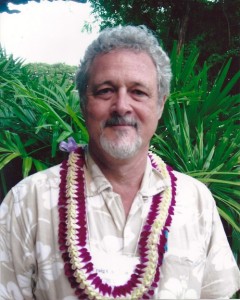 Professor Chaudron was born in 1946 in St. Louis Missouri and educated at Wabash College (BA in philosophy and French, 1968) and the University of Toronto's Ontario Institute for Studies in Education (MEd in educational theory, 1976; PhD in educational linguistics, 1982). Prior to joining UH-Mānoa, he taught kindergarten in Denmark for 4 years and spent two years as a visiting assistant professor at the University of California, Los Angeles.

He specialized in second language classroom research, research methods, and applied psycholinguistics. His single-authored book Second language classrooms: Research on teaching and learning (Cambridge University Press, 1988), won the Modern Language Association Mildenberger Prize in 1990 and is still regarded as the seminal work in the field. His commitment to good work included numerous visiting professorships and collaborations with scholars in Europe, Asia, Australia, and the Pacific region, and across the U.S. He served as the North American editor of the journal Applied Linguistics (Oxford University Press, 1989-1995), and he was twice an elected member of the Executive Board of the American Association of Applied Linguistics. He was a meticulous researcher who set rigorous standards for his own work, as well as that of his students, for whom he was a fine, caring mentor.

Professor Chaudron is survived by his wife, Dr. Lucía Aranda, who has been a member of the UH-Mānoa community since 1995, and by his three children, Camila, Cara, and Nicolas.

Skip back to main navigation