A black and yellow spider hangs motionless in its web,
and my son, who is eleven and doesn’t talk, sits
on a patch of grass by the perennial border, watching.
What does he see in his world, where geometry
is more beautiful than a human face?
Given chalk, he draws shapes on the driveway:
pentagons, hexagons, rectangles, squares.
The spider’s web is a grid,
transecting the garden in equal parts.

Sometimes he stares through the mesh on a screen.
He loves things that are perforated:
toilet paper, graham crackers, coupons
in magazines, loves the order of tiny holes,
the way boundaries are defined.  And real life
is messy and vague.  He shrinks back to a stare,
switches off his hearing.  And my heart,
not cleanly cut like a valentine, but irregular
and many-chambered, expands and contracts,
contracts and expands.

A thin sickle moon hangs in the western sky
over the house where my friend used to live.
Her blood count decreases, as cancer deals
her another bad hand. Her backbone is turning
to ivory dust; her platelet counts diminish
in spite of transfusions. The sky is a vault
of black ice; the starry dust of the Milky Way
flung over our heads, Wisconsin to Pennsylvania.
She is buying new clothes for spring, a ring
of blue topaz to wear at night. She has backed
dark horses before, long shots going out at 100:1,
and won. She plays blackjack, shoots craps, gets comped
at Reno. Even though these odds are stacked
for the dealer, the house, she keeps on playing,
rolls the dice, rattles them bones. 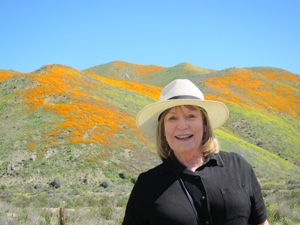 Barbara Crooker is a poetry editor for Italian-Americana, and author of twelve chapbooks and nine full-length books of poetry. Some Glad Morning, Pitt Poetry Series, University of Pittsburgh Poetry Press, 2019, is the latest. Her awards include the WB Yeats Society of New York Award, the Thomas Merton Poetry of the Sacred Award, and three Pennsylvania Council fellowships in literature. Her work appears in such literary journals and anthologies as Common Wealth: Contemporary Poets on Pennsylvania and The Bedford Introduction to Literature. She’s been on The Writer’s Almanac fifty-some times, Tracey K. Smith’s The Slowdown, and featured on Ted Kooser’s American Life in Poetry. “Autism Poem: The Grid” first appeared in Radiance (Word Press, 2005), and “She Tells the Dealer, Three More Cards” in her book Selected Poems (FutureCycle Press, 2015).