Adam LeBlanc and Joseph Stanton became friends in the 1990s when there were various efforts in Honolulu to forge a consortium to promote the arts. The meetings LeBlanc and Stanton attended led in various productive directions for the arts community and were also opportunities for artists in various disciplines to interact and to consider each other’s works.

LeBlanc and Stanton first collaborated when LeBlanc invited Stanton to compose poems that would speak to a sequence of light-infused sculptural works LeBlanc was working on. He had already given the series of works the title “Conjuring Heroes.” He was constructing the abstract light-boxes in 1994 for an exhibition at the Koa Gallery at Kapi‘olani Community College. As the works were taking shape LeBlanc and Stanton engaged in a series of conversations. Stanton’s sequence of poems for “Conjuring Heroes” were responses to the art pieces as well as reflections on the ideas that emerged in the conversations with LeBlanc. In the Koa Gallery exhibition, LeBlanc displayed the five boxes, each infused with a unique color of light; the colors of the lights were white, orange, violet, red, and gold. Stanton displayed seven poems—one for each light box and with a prologue at the beginning and an epilogue at the end. The artworks and their accompanying poems were conceived of as universal in their implications and yet also intimately connected to the hopes, fears, and concerns of LeBlanc and Stanton. In 1996, Stanton published six of the poems in Chaminade Literary Review. In that publication, he decided to leave off the prologue. In 1999, Stanton published the sequence again in a collection of his poems, Imaginary Museum: Poems on Art. In that book he gave the sequence the title “Conjuring Heroes in Several Colors of Light” and, in an epigraph, indicated that it was “after a sculpture by Adam LeBlanc.”

Over the years since the 1990s, LeBlanc and Stanton continued to have conversations about their various projects. In 2018, LeBlanc suggested the organization of a group show that would include some of the best of Hawai‘i’s veteran artists. The idea was to challenge the artists to exhibit some of their best current works. The title of the show would be “Where Are We?” LeBlanc and Stanton collaborated for that show—putting together a sequence of paintings and a sequence of poems. In each case, the title of the artwork and the title of the poem were the same. The seven titles were “Nowhere,” “Super Liminal Dithering,” “Whispering Shadow,” “After Damascus,” “Glass Messengers,” “Prevailing Winds,” and “Voyage.” At the opening of the show in January of 2020, the LeBlanc/Stanton collaboration received much favorable comment. Many were surprised to see a poem/painting collaboration where the written work was so specifically attuned to the visual work and vice versa. It was noted that the poems and art pieces spoke to one another. As with “Conjuring Heroes,” the intimate inter-involvement of art and poetry in the Leblanc/Stanton collaboration was the byproduct of conversations between artist and poet.

“Nights on B Street” is a work LeBlanc created—in its original, non-collaborative, version—in 1993. The seven detailed urban scenes were inspired by LeBlanc’s experiences and observations in various cities, but he had in mind primarily New York City and Boston, the Eastern cities where he had spent the most time. Here are LeBlanc’s remarks about how he came to construct the first exhibition of “Nights on B Street”:

Like annotations in the margins of my back pages, bits and pieces of urban street scenes began to assemble of their own accord. Chimney-like sections, door fronts and stoops, fire escapes, moonscapes, elevated train tracks, telephone poles and lines, street signs. There were even some trash barrels—it just went on and on. Then, in time, characters began to appear—lots of characters, and there they were. All these figments showing up in my studio. Every piece seemed tied to the places and people I knew in another lifetime. I reflected on what it would be like to be wrapped up in those days again. I found myself adding playing cards and red arrows that seemed to evoke actions and reactions—the game pieces of those times. I found myself choreographing the streets. I could hear the music, as the rolling stones of those days brushed by. There were counterpoints of saturated color against night shadows. There were the forms and functions of a strangely real City whose vibrant stories had remained untold. Funny how time catches up with memory.

“Nights on B Street” was exhibited at the Honolulu Academy of Art and was widely praised. Stanton admired the show and often talked about it with LeBlanc, especially during the planning phases for “Conjuring Heroes.” From time to time over the years, LeBlanc and Stanton chatted about “Nights on B Street.” Stanton mentioned more than once that he would like to have the opportunity to write poems in response to the “B Street” pieces. Therefore, when LeBlanc brought the pieces out of storage and Gallery ‘Iolani greenlighted the show, Stanton began work on his “Nights on B Street” sequence. As with their previous collaborations, LeBlanc and Stanton talked about the works—sometimes in person, sometimes over the phone. Stanton had chances to see the works, and he also had photos of them so that he could consider and reconsider what was happening or about to happen in the urban scenes.

For Stanton, the world of “Nights on B Street” was all about New York City. Stanton first spent time in New York City in 1979 to 1980. He was there to work on graduate studies at New York University. Those studies brought him back again and again to New York City throughout the 1980s. After receiving his PhD in 1989, he continued his annual visits to New York City and Long Island because he loved those places and had friends to visit. Visits to New York City have been an annual ritual for Stanton from the 1990s through the present. Although LeBlanc’s memories prompted directions in Stanton’s “Nights on B Street” sequence, Stanton’s personal experiences of New York dominated his “B Street” musings. It is interesting, therefore, that despite Stanton’s heavy reliance on his own memories, LeBlanc finds in Stanton’s “B Street” poems much that resonates with his own urban recollections. “Nights on B Street” is deeply collaborative with poems that evoke the art pieces and art pieces that give visual form to the poems. 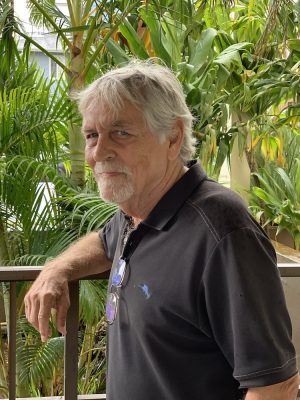 Adam LeBlanc has lived in Hawai‘i since 1989 and continues his work in Honolulu.  In the 1970s, he studied at the Art Institute of Boston, the Fine Arts Work Center of Provincetown, and Boston University. His teachers included Robert Motherwell and Philip Guston. He has exhibited his work in various venues on the Mainland. In Hawai‘i he has had solo shows at Honolulu Academy of Arts Center at Linekona (the original version of “Nights on B Street “) and Kapi‘olani Community College’s Koa Gallery (“Conjuring Heroes”). He has had work in group exhibits at the University of Hawai‘i main gallery (“Cities Of Shadow and Light”) and Gallery ‘Iolani at Windward CC (“Where Are We?”). 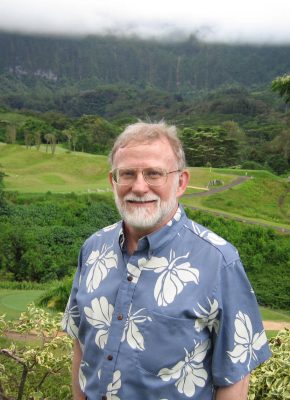 Joseph Stanton has lived in Hawai‘i since 1972. His books of poems are Moving Pictures, Things Seen, A Field Guide to the Wildlife of Suburban Oahu, Cardinal Points, Imaginary Museum: Poems on Art, and What the Kite Thinks: a Linked Poem. His seventh book of poems, Prevailing Winds, is forthcoming in 2022. His poems have appeared in such journals as Poetry, Harvard Review, New Letters, Antioch Review, New York Quarterly, as well as in most of Hawai‘i’s literary magazines. His other sorts of books include Looking for Edward Gorey, Stan Musial: A Biography, The Important Books: Children’s Picture Books as Art and Literature, and A Hawaii Anthology. He often exhibits mixed-media poetry broadsides at the annual Aloha Ho‘omaluhia exhibitions. He is a Professor Emeritus of Art History and American Studies at UH Mānoa. He occasionally teaches poetry workshops such as those at Honolulu Museum of Art and Poets House (in New York City).