My father made his living as a lawyer in an old, greying building called Manhattan House. He wore a makeshift uniform to work: a long-sleeved white-collared shirt, black pants that sagged at the hip and went past his ankles (because my father was not a tall man), and black dress shoes with a little silver buckle at the sides. Sometimes I would see balled-up socks in his cupboard; when unfurled, they would have holes of varying sizes in them. He would take off his shoes after work and show me how his toes stuck out from these holes. I was always amused by these secret interactions between my father and myself, and I felt like I knew him like no other person. When I grew older and found holes in my own socks and underwear, I would keep them in that condition for a stint, remembering my father’s comfort in keeping these clothes as they were. The way my father held on to his dog-eared things would eventually speak about the way he handled his clients.

The lawyers I saw on television, like Jim Carrey’s version in Liar, Liar, or Richard Gere in Primal Fear, were handsome and charismatic to a fault. My father looked entirely different from them. At the time, he had a brambly moustache, which he combed with a little brush he kept in his pocket, no bigger than my pinky finger. He kept this in an old cigarette case, though he did not smoke. His clothes often did not fit him right; they were misshapen and crumpled, and there were always stains near his shoulder because he would be in a rush after lunch to get back to the office. He would wipe his mouth using his bicep, leaving food trails of spices, soups, or coffee on the upper sleeves of his shirt. He wore thin-rimmed glasses, and his face had liver spots on them, concealed within his dark complexion. In the mornings when he was rushing to get to work, I used to watch him hastily apply Speedstick to his armpits, which sprouted a wiry bush of hair resembling the metal foam sponges used to clean grease off dishes. He applied this in two strokes, and when it made contact with his skin, it made a sound like matchsticks being lit, or laundry being scrubbed on old washboards. This used to make me wonder if my father’s skin and hair were like an animal’s. He was swift and insensitive when it came to his appearance. The Speedstick scent stuck to his shirts, and when he hugged me after work, I breathed in his comforting scent of deodorant, coffee stains, and whatever soap he was using at the time. In my girlhood, I assumed all fathers smelt this way. But even though he seemed so different, there was never any doubt in my mind that my father was a lawyer. That was what I answered anyway, when anyone asked me what he did. Daddy is a lawyer, at Lee & Tan, which was the name of his firm. It got to the point where I confused my last name as Lee & Tan as well.

I should have known by then that he was not a typical legal advisor. When I grew a little older, occasionally he would take me out to meet his clients for dinner. A lot of them were illiterate and couldn’t really speak much English. My father conversed with them in their various dialects or in tuckshop Chinese, curt and quick, their staccato conversations punched in with swear words or laughter. These dinners happened late at night, sometimes after eleven, because his clients usually worked odd hours. Some of them were handymen, some were butchers. There were ex-gangsters trying to start anew as massage parlour owners and acupuncturists—even an island chief. There was a man who believed he was a reincarnate of a deity, running a business as a medium. All of them were loud, missing teeth, and absolutely colourful and exciting to be around as a young child. I don’t think my father was ever aware that I remember so much, and how proud I would feel when he brought me to these dinners, where I was the sole girl child in a sometimes chaotic circle of men who were known for being violent and uncultured in the eyes of my country. It helped that the food was delicious, and I learnt to eat whatever was served in front of me at a very young age. His clients were not the type who ate daintily and healthily, so I had to learn to eat whole crabs, steamed fish with scallions, sweet and sour prawns, heap upon heap of longevity noodles, and of course there was always beer. Beer by the bottle, beer by the crate. Vegetables and fruits were out of the picture. This shaped me into a woman who was undaunted to hold myself in a roomful of men, unafraid to answer back when needed, never shying away from a conflict I felt was not mine to apologize for. My father trusting that I could be a participant in his clients’ rowdy dinners indicated to me that I was the same as any one of them. I never looked at them differently, and they welcomed me as an honorary member.

These dinners were their way of paying my father back for helping them with legal transactions they often did not have access to from more established firms. Singapore is a strange place. On one hand, it is renowned for being clean, state-of-the-art, and top notch in education, with a reputation as one of the wealthiest countries in the world. On the other, there is a generation and a community of people entirely left out from its fast-moving progress, the people who do not have the fortune nor resources to constantly upgrade their language, knowledge of government protocol, and savvy of modern city life. My father found himself in a unique position as one of the rare Chinese-educated university graduates managing to land a job in a law firm, adept enough in both Chinese and English to converse with the right officials and the crowd that was left behind. He used that to his advantage, and in the early days, when he decided to venture forth to start his own business, I remember seeing him happy. Like the worn clothes my father kept wearing, he never gave up on his clients. He could not bear to throw any of them out. He charged what they could afford, and if they paid in other ways or means, he was always open to accepting what they had to offer alternatively. And as we all eventually glean from this short time we have on Earth, food always appeases.

The father I describe on these pages reminds me of a certain nostalgia and wistfulness akin to looking at a past stamp collection. You turn the pages of your album, thinking back to how you would gather each stamp painstakingly for the sake of fun, never imagining how it would become obsolete in the future. The father who used to show me holes in his socks and sit next to me in bed reading stories before sleep seems to have long faded away, just as my stamps have started to yellow and weather.

Try as he might to get by, money became a problem. I do not know the exact circumstances, for when you are a child, every moving moment is murky, like viewing fish in a pond. It happened in sequences: we cut down from two cars to one, my father started coming home late, he and my mother began to argue more. The dinners continued, but they took on a more sinister undertone. The clients would sometimes get drunk, and brawls would break out. Some of them could not go to the hospital because of the cost of healthcare, so they would call doctors they were familiar with to stitch them up in the dead of night. Doctors and lawyers of my father’s time, a dying breed of men who pledged to serve their fellow brethren for the sake of keeping them alive. Still, I tried to continue to accompany my father in spite of being frightened and increasingly aware that he was in a difficult line of work, desperate to cling to the time we had together when we could be unparalleled buddies, revelling in the cheer of saved men’s relief and celebration. The last dinner we went to, my father and I were testing each other on the different capitals of countries while his clients sang their woes in karaoke.

I particularly remember the last dinner because by then I had also grown, and I was texting boys and had friends to go out with. I was starting to get impatient with the rowdiness of these dinners and my father’s drinking. It used to be social, but it insidiously crept in on him and became a vice he depended heavily on. Perhaps he drank to escape my mother’s threats, the injustice of his clients, the choices he had come to make out of kindness and hurt. Again, this development is murky to me. There are moments in my adult life now where I catch my father falling asleep drunk, his head lolling like an infant’s, and there is a pain and tenderness in my heart I cannot capture fully. Where have all his clients gone? Where were the men he had striven so hard to save, compromising on his own strength?

I write this to commemorate them, because I hope they are out there living a life my father helped to ensure. I hope that the butcher is selling his meats with fervour, that the island chief is picking durians off his land and splitting them open with his neighbours. I hope that the man who is a reincarnate of the deity continues to be possessed with the spirit that does more goodwill than mischief. I hope that the gangsters have stopped their bloodshed, are still running their businesses of massages and acupuncture inside shopping malls where wayward youth have a place to find employment should they be led astray. And I hope they are still having dinners out there, while my father goes to sleep on the couch in his old age, battered from the lonely blows he has had to deal with for the past three decades, out of the humble law firm called Lee & Tan I once mistook as my last name, in dilapidated Manhattan House. 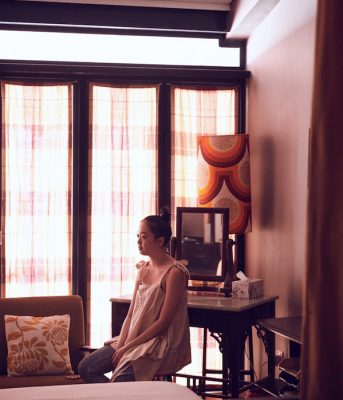 Euginia Tan is a Singaporean writer of poetry, creative nonfiction, and plays. She enjoys cross-pollinating art into multidisciplinary platforms and reviving stories. Contact her at eugtan@hotmail.com.