Monsieur Farigoule sent his chauffeur, who arrived in a black Citroën DS. It was a quarter to nine and, although it had rained earlier in the day, the night was clear. I sat alone in the back and tried to calm my mind. My teacher in Tahiti had never accepted payment in currency. He had been paid with a chicken, a tin of pilot crackers or a bag of fruit. I thought about an emerald ring I had seen near the Place Vendôme and how inside the precisely cut, rectangular surface, its particular shade of green was perfection, a deepness that suggested impenetrability.

According to the late-night movies I watched when I could not sleep, European mediums had long and dramatic séances. I wondered how they did it. “It’s mostly fake,” Cecile said. Even so, the theatrics were impressive and I was inclined towards the possibility that the essentials, at least, were authentic. I hoped Monsieur Farigoule was not expecting something similar.

Monsieur Farigoule was in his seventies, a short man with a heavy, square face. He wore a dark-grey suit with a red Legion d’Honneur rosette on the jacket lapel.

“Monsieur Li,” he said, shaking my hand. Dark hair sprung from the back of his hand; his palm was spongy and smooth. His study smelled of tobacco, and there was a bouquet of white irises on a round marble table. A large gold-framed mirror hung over the mantelpiece, reflecting the bouquet. Monsieur Farigoule poured cognac into two glasses and asked if I preferred a particular room for my work. I said the study was fine, and he sat down at his desk while I took the chair facing him.

“You were recommended by a friend of my wife—her family was also from Auvergne,” said Monsieur Farigoule. He leaned back into his chair. His hair had turned grey, but his eyebrows were black and his eyes a dark blue. “You are very young,” he said.

My drink was still untouched. “Shall we begin?” I asked.

He paused for a moment and then nodded his head.

“Could you bring me something of Madame Farigoule’s?” I asked. “Something like a handkerchief, something that belonged to her alone.”

He rang for the maid and requested his wife’s purse. The maid appeared several moments later with an enveloped-shaped evening clutch. I ran my hand over the finely polished leather; the purse closed with a single brass clasp. I handed the purse back to Monsieur Farigoule, who signaled for the maid to leave.

I took a breath and closed my eyes. For a moment there was nothing and then it approached—the immense greyness and something that always felt like laughter. I could hear, as if from a far distance, Monsieur Farigoule moving slightly in his chair and, in another room, a door closing.

When I opened my eyes again, I was standing by the doorway of the study. Monsieur Farigoule was sitting at his desk, his head bowed over the ink blotter. He did not move, and I thought he had fallen asleep. From the clock on the mantelpiece, I saw that it was almost a quarter to ten.

Monsieur Farigoule cleared his throat and raised his head. I saw that he was not asleep, but that he had been studying a sheet of white paper lying on the desk before him. He glanced around the room as if I were not there. I stood without speaking, uncertain if I should stay. After a moment, he walked from behind his desk to pour more cognac into his glass. He left the paper on the marble table and I saw that it was a simple line drawing. There was a beach, some umbrellas, distant rocks, and a lighthouse. I realized that I had just drawn this picture, that it had a meaning unknown to me and that within the drawing was the message that Madame Farigoule had sent to her husband.

We drank in silence and then Monsieur Farigoule rang for the maid, who appeared with my jacket. I turned towards Monsieur Farigoule, but he had picked up the drawing in his hand and was looking towards the flowers, away from where I stood. Outside, the chauffeur was waiting, the motor of the DS already running. I thanked the chauffeur, explaining that I would walk.

The envelope was inside my jacket pocket. I decided to wait until I returned to the apartment to count the money, but I could feel its thickness through the fabric.

The streets were full of taxis. A couple walking arm-in-arm passed me, the woman leaning her head on her partner’s shoulder, her dress waving in the wind. I wondered if Monsieur Farigoule and his wife had once walked together in the same way, strolling perhaps along the beach with the umbrellas and the faraway lighthouse. Had they fought? Had they grown estranged, had they reconciled before she died? In a fleeting moment, his wife had sent him vague lines and scribbles: the sea, the land and the sky, everything there was.

I took the footbridge across the Seine. The wind rippled the reflection of lights on the river, and the shapes of clouds moved quickly in the night sky.

A few pedestrians passed on the bridge – an older black man and some tourists with sweaters knotted around their necks. Near the center of the bridge stood two women, very young, sixteen or seventeen years old, and exquisitely dressed. Their clothes had an intense purity of color, the palest pink running to a deeper hue approaching red. I paused, and they both turned towards me. I was aware of the weight of the envelope of money inside my pocket. The two women waited, and I wondered awkwardly if I should speak first, but then the wind blew over the bridge, fanning their hair over their faces. They turned away, one bending down to pick up something leaning against the wall of the bridge – a kite. The other woman held the spool of string.

“Vite, vite, quickly,” she said to her companion. “Move back. A little further.” They were giggling, running, balancing on their stiletto heels, and I was forgotten. By the time I reached the end of the bridge, the kite was flying above the river, a paper diamond barely visible in the night. I could still see it faintly, or rather I saw its string floating up into the darkness, and then I turned, walking with a sudden hopefulness into the city as it slept. 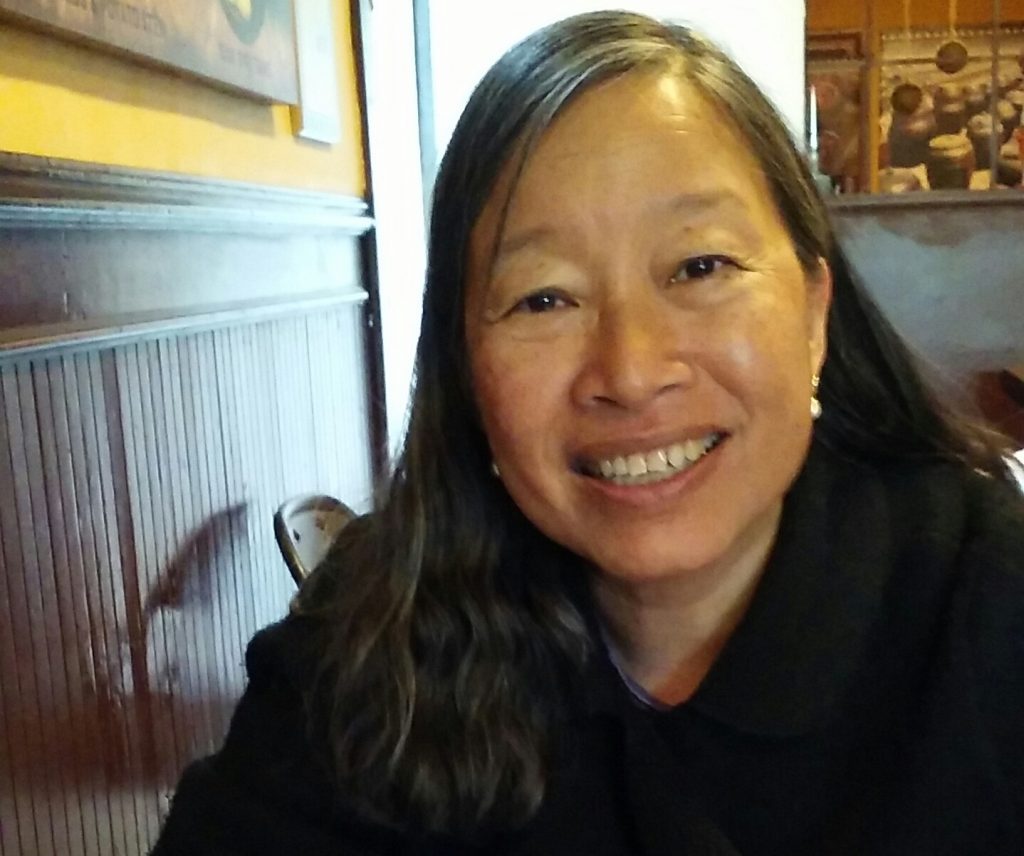 Lillian Howan spent her early childhood in Tahiti and later graduated from the University of California, Berkeley, School of Law. Her writings have been published in Asian American Literary Review, Café Irreal, Calyx, New England Review, and the anthologies Ms. Aligned 2: Women Writing About Men and Under Western Eyes. She is the editor of Rosebud and Other Stories (University of Hawai’i Press, 2011), a collection by legendary playwright Wakako Yamauchi. Her debut novel, The Charm Buyers (University of Hawaii Press, 2017), set in Tahiti during the last year of French nuclear testing in the Pacific, is the first English-language novel exploring multicultural social issues in French Polynesia.