The blue house has a courtyard, and gourds, and fat Aztec bitch-goddesses with stone bellies.

The column is a cracked spine of steel resting in traction.

The fetus has a flower, the fetus is a plant with one root that’s buried in a skeleton.

The nursemaid has a shredded breast.  She wears a mask.

The husband has a too-hungry dick.

The child wears a crown.

The child died and was not cured by an ex-voto sentiment.

The mother isn’t one.

The mother has a fissured womb, a desert, a cracked landscape of dried blood and dust.

The father pokes in its dry bed.

The monkey licks a tit.  She put it there to say my dead child.

The parrots suckle on sad nipples, chafed and dark.

Frida says This is me.  Look at this paint.

Frida lays flat on a floating bed, draped in steel vines, without hope.

She is a whole melon, splayed and seedless. 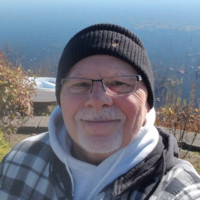 Jim Mancinelli is the founder/moderator of the Moveable Beats Reading Series in Philadelphia.  He has published two chapbooks, Primer, and In Deep.  His most recent work is entitled The Bartimeus Poems for which he also did the drawings.  His poems have appeared in The Connecticut River Review, Philadelphia Poets, The Schuylkill Valley Journal of the Arts, Sea Change, Mad Poets Review, Fox Chase Review, and issues of Poetry Ink, an anthology of Philadelphia poets. He has been a featured reader on Live from Kelly Writer’s House.  He was a finalist in the Atlanta Queer Literary Festival, judged by Mark Doty, in 2011.