I would like to be a shrinking violet-
green swallow darting out over the Black
Canyon of the Gunnison, nothing below me
but two-thousand feet of shaded granite,
roiling water, gravity. In this immensity,
I am a speck gobbling lesser specks.
Humans watch me from the overlooks—
Dragon Point, Chasm View, The Narrows.
They delight in my acrobatics, in my singing.
They follow me with their eyes, as long
as they can. From smallness, I get smaller
and smaller, until I disappear—a nothingness
among cliffs. They turn and go back to their cars,
their towns, their cities. I remain, preserving
the infinite, one wingbeat at a time.

I ride my forgotten bike on the forgotten path,
steering between winding cracks, rolling over
horizontal gaps green with grass, slaloming
between piles of elk scat. I clip a gate,
sending a few pellets flying. It’s a Tuesday.
11 AM. I have no job. Though to be fair,
I’m overemployed as it is, what with the lichens
I need to speak with later, and the butterflies
seeking my counsel. There’s only so much
one man can do. I need to hire an assistant,
someone to organize the pine cones
when I’m up to my ears in clouds. 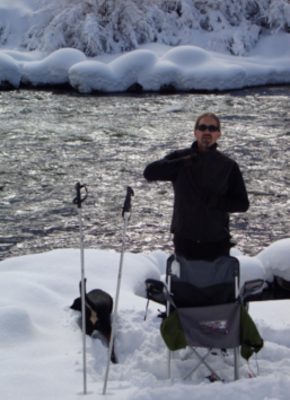 José A. Alcántara lives in western Colorado. He has worked as a bookseller, mailman, commercial fisherman, baker, carpenter, studio photographer, door-to-door salesman, and math teacher. His poems have appeared in Poetry Daily, The Southern Review, Beloit Poetry Journal, Spillway, Rattle, RHINO, The American Journal of Poetry, and the anthologies, 99 Poems for the 99%, and America, We Call Your Name: Poems of Resistance and Resilience. The Bitten World, his first poetry collection, is forthcoming from Tebot Bach.