Liang says, “I am assigning you a transport.”

“You are to make delivery of a woman,” he says.

The Problem Is. The Problem Was. The lurking, always a dismal science. Species humming to each other across the planet. The Network is always there, omnipresent, no one knows how exactly. There is nowhere to hide.

“As of yesterday, nothing. Nevertheless.”

When I still refuse to respond, he says, “This one is full-blood.”

We are, all of us, in the process of becoming. Our genes are not stable. It began happening many cycles ago. I am Half-Something. 46.8% of my make-up is no longer human.

But, though increasingly rare, Full-Bloods do exist. A Full-Blood’s parents are both human. The Network wants them. For what purpose, I don’t want to know.

I don’t love what I do. How can anyone ask me that?

There are 411 Transporters. The only one I’ve met personally is Hector. He lived in Cienfuegos. There were several freelancers working in his area and I didn’t know if he requested help or how he handled them. Last year I got an assignment to transport from Isla de la Juventud. Isn’t that Hector’s area, I nearly said.

Where is he? Where did he go?

Once, I was transporting from a village in the Arctic Circle. The skiff I was using traced an unfamiliar coastline. Humpback whales breached all around me. I nearly crashed into a glacier.

Shadows of seabirds flashed across my face. I listened to their mournful, restless cries. The man I was transporting was a Metlakatla. What had this man done? Who had he wronged? He would never see this place again, these snow-capped mountains and mighty forests.

I accomplished the retrieval in Beijing.

My Mandarin is—well, let’s just say that Professor Ibn Tulun in the Great Mosque might not have had the purest Beijing delivery, but when I was just starting out, he was the best I could afford.

China is one of the last remaining walled enclaves. The population is known for inter-breeding with its Herds. They’re quite surly to Outsiders and, it goes without saying, they hate The Network. I still bear scars from my last assignment there.

I make entry from Mongolia, my Altaic being marginally better than my Mandarin.

She’s alone when I find her. I’ve been informed she has a child, a son. With whom? Another full-blood? Liang said no. Still, it would have been better if I had both of them. That boy is a danger.

The woman, Tu-an Ju, is silent. She gives me a hard glare. She keeps going on about how ashamed she is, blah blah blah.

“How this is so easy for you,” she says.

I take a close look at Tu-an Ju. Assessing.

“Go on, say it. You think I’m gorgeous,” she says. You do not have any idea how that sounds in hard, clipped Mandarin. Until you hear it.

She continues, “You’re probably thinking: Why couldn’t I have a transport in Fiji? Islands, humpback whales, white sand. Warmth.”

The transport team did a job last night. In Fiji. But how did Tu-an Ju know? I have a twisting feeling in my gut. Is she one of those fucking psychics. Did she know I was coming for her? Was this a trap?

I have to get in touch with Liang. Fast.

I get her to a choke point, on the outskirts of Santiago de Chile. Buzzy buzzy. Every time I’m here I can’t help thinking, Is this when I finally meet Oblivion?

I deposit Tu-An Ju in the hold of some rusty cargo transport, very twenty-first century, it’s a wonder there are still transports like this in circulation. She’s coiled up like a spring. There’s a flash of dark eyes and then I shut the trunk and call Albert.

“Yes?” he says, sounding annoyed. “Is there a problem?”

“Wait. Why?” Albert says. “I have to clear it with Liang. You know how he gets.”

“No more than a day. Hopefully,” Albert says.

That night, I think, Fuck. I’ll have a go at her. I’ve never slept with anyone whose face looks like a donkey’s ass. She’s probably been smacked around. A face like that.

When I release the lock on the trunk, she surges out like a wave. I keep a tight hold of her and drag her to my room and shove her to the bed. She turns and looks warily at me. “I trust you’re not thinking of having sex with me,” she says.

“As a matter of fact…” But, I think, Why mince words? She can read minds.

“Has it been awhile?” she asks. “It’s okay.” Okay in English, not Mandarin. That confused me a little.

“Do I confuse you?” she asks, coming closer.

“You’re either a hedonist or an apostle,” she says. “Which is it?”

This is beginning to feel like the time I got stung by a storm of hornets in Alsmeer.

I refuse to answer.

“You can play that game all you want, you stupid man,” Tu-an Ju says.

She’s even more appalling up close. Her hair gives off a sour-ish smell.

“What was his name?”

Right. There are female transporters.

“What makes you think I need healing?”

“You want to meet Oblivion, don’t you? I can make it happen.”

“Every human being wants to die. It’s what we were born for. It’s wrong—cruel—to deprive us of the experience.”

“No one cares what you think.”

“When you were seventeen, you almost died. But someone else took your place. And you let him.”

“Ah! The initial approach, the unassertiveness. All trickery. Kudos.”

“Never been surprised before? You’re that stupid.”

“Low down on the left, please.”

“What? You weren’t expecting that? Now look who’s stupid.”

“Tell me: where do I fall on the scale?”

I’ve always thought of myself as a gentle man. But I suppose that’s because I’ve never been tested. Until now.

There is a mystery to Tu-An Ju. A kind of pull.

My parents were Journey Makers, traveling to places ever more remote. They became Collectors of Memory. What tales they told!

Sunshine was still benign. I basked in it.

Every night, my mother read me a specified number of pages from a large book. I cried when she was done reading, I would beg her to continue. It was painful to think I had to wait another day to reenter that special and fascinating world, the one that lay like a secret between the pages of a book. “There will be time,” my mother would say. I would fall asleep sated with emotion.

But she was wrong. I learned the day my mother was taken. This part of my backstory is riddled with cliché. My father advised me to think of my mother as dead. He set the example. I failed to follow. He was so exasperated with me that he would say irksome things like threaten to take me to Ebola. Ebola is a place of legend. Even if it doesn’t exist, I don’t like my father bringing it up.

There are many stories like mine among transporters. As Hector used to say, “It’s not what they take away from you that counts, it’s what you do with what you have left.”

I perform an elaborate yawn.

“You think you’re so intelligent,” she says.

“Perhaps I let myself be found.”

“Connect me to The Network,” she says.

I duck my head. The top of my skull had an extra layer of bone. It’s a professional upgrade, costs a thousand coin. The Network still hasn’t reimbursed me.

And yet, she’s penetrating—she’s getting through. Before I have time to signal Cyber-threat, she’s inside.

I’m under attack! I silent-scream.

You’re not permitted in my brain. Get out!

She’s right. I most certainly do not. Want. To die.

What is she doing?

“I’m going to save your worthless life.”

“The same thing you want, Transporter. To feel safe. And, not to burst your bubble or anything like that, but nowhere is safe until we destroy It. Or Him. Or both. Zheng shi ruci.”

“Your Mandarin isn’t that bad.”

I sit down. She approaches. She smells different now. I allow her to stroke my cheek. Soon I’m panting and salivating, like one of those dogs.

Tu-an Ju glances out a window I haven’t noticed before. Sunlight, real sunlight—not the fake manufactured kind—falls on her face.

I must be slipping. I’m getting too old for this job.

Here it comes, I think.

But all I see is a parade of Full-Bloods, slowly coming down the street. They are floating, bobbing over the street like balloons.

Then the Full-Bloods are gone, and she is gone, and I wait for me to be gone, too. It isn’t a bad feeling.

The story goes like this: there was once a network of streets that stretched as far as the eye could see. This place was called The Network. It may only have been a figment of someone’s imagination, but nevertheless. It existed.

The Network was all about self-improvement. There were places where you could select for pick-up—apartments, countries, diaries, memory aids, diets or dieticians, neurologists, smoke, water, spiders, snakes, views—arranged, naturally, in alphabetical order.

The Network has current openings for Highly Sensitive Special Projects, Transporters Level II and III. Require self-motivated individuals with a willingness to travel. 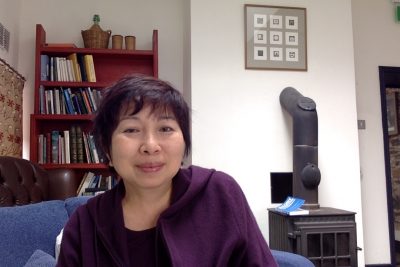 Marianne Villanueva was born and raised in the Philippines. She is the author of the short story collections Ginseng and Other Tales from Manila, Mayor of the Roses, and The Lost Language. Her novella, Jenalyn, was a 2014 finalist for the UK’s Saboteur Award. Her individual stories have been finalists for the O. Henry Literature Prize, nominated for the Pushcart, and included in Wigleaf’s Top 50 (very) short fiction of 2016.