Fools’ Guide to the Underworld

0 The realm of the dead
1 mythologically or metaphorically
or literally within .

3 Where the leaves fall from the present (into)
4 the past, personal and collective;
5 substrata, dissolving and indissoluble,
invisibly feeding the psychic and material future,
a haunting mother

6 Or, the ocean
on which the land itself floats, and is fed, planktonic
7 subaqueous, subsurface, subcutaneous,
seething footnotes beneath a scenic ocean view,

“What’s true of oceans is true, of course, of labyrinths and poems.”

8 Or, the innards of the body, its organs and domed, plutonic blimps,
carnelian carnalities, multiple coalescing structures and logics
the body’s automation of the miraculous

as in the glossy, layered transparencies of anatomy
or the glass bottom boat of the surgical theatre

9 where illness begins as a small errancy
pulling the overlord under, leading the body down
to that outer understory: mortal, humbled.

12 or, the sea of memory,
upon which only the savior walks, the holy “ghost.”

13 Or, the composting seethe of psyche that mulches and sprouts.

15 Or, cellar of the unsavory, forbidden, or denied; the unselved
shadow where the sun, boxed and shelved, don’t shine.

19 The animal, reptilian earth crawling under and within
the civilized towers of the self
the monstrous compositions of the self

20 As in the recurring childhood dream,
in which I enter my parent’s bedroom and tremble seeing my dad
as a wolf standing upright in a cage in the left corner
and walk past, exiting the back door, stage right

21 Inhabitable, self-propagating dreamscapes tubering one to the next,
city of underground tunnels, unknown in waking hours,
until one dream recalled, exposes antique others, vast terrain.

23 Or beneath all hierarchies of labor, the subjugated animals:
millions of male chicks gassed or suffocated in trash bags; hogs
squealing nightmarishly on the slaughterhouse floor.

24 The ecological footprint, or afterlife, or cataclysm of our consumer |daze.
As in the plastic soup of our planktonic conception

25 The “invisible” world. For example
26 The global south upon which we walk, gazing at flowers in shop windows.
27 Circles of hell we host here on earth, rendering any other world superfluous for our grand cosmology.
28 Third world nations and people cordoned by borders, fences, guards, and walls, concentrated for maximum extraction of capital.

29 Or the unsaid, erased, and redacted, waiting chthonic at the borders of speech.
30 Or the unseen, unremembered, unacknowledged clamoring under the foggy smoke of consciousness.

31 Also, the unknown land, “from whose bourn no traveler returns”
32 Forbidden to mortals.
33 Thus, the destination of the hero’s voyage
34 and the source of the shaman’s healing magic.

35 Or the way of the artist’s descent, to study the depths, to master his powers.

38 walking through the purgatory of all possible texts.

43 All my love must live somewhere. 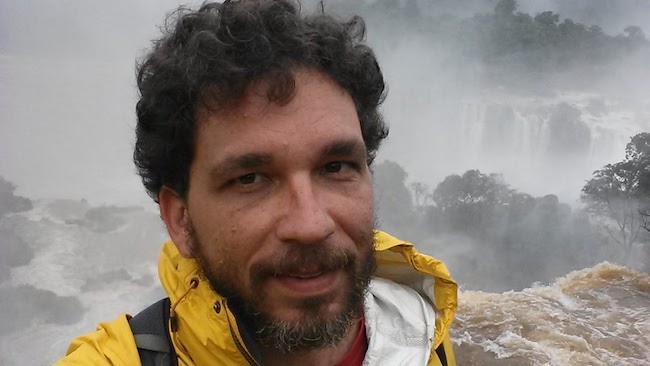 Sam Taylor is the author of three books of poems, including Body of the World (Ausable/Copper Canyon), Nude Descending an Empire (Pitt Poetry), and The Book of Fools: An Essay in Memoir and Verse  (forthcoming, Negative Capability). “Fool’s Guide to the Underworld” is an excerpt from The Book of Fools, a book-length experimental elegy for our earth and oceans that marries themes of global, ecological loss to personal, confessional ones. A native of Miami and a former caretaker of a wilderness refuge in New Mexico, he currently tends a wild garden in Kansas, where he is an Associate Professor and the Director of the MFA Program at Wichita State. His work has been recognized with the Amy Lowell Poetry Traveling Scholarship, among other awards, and his poems have appeared in such journals as The Kenyon Review, AGNI, and The New Republic.