Inter/Nationalism: From Palestine to Hawai'i 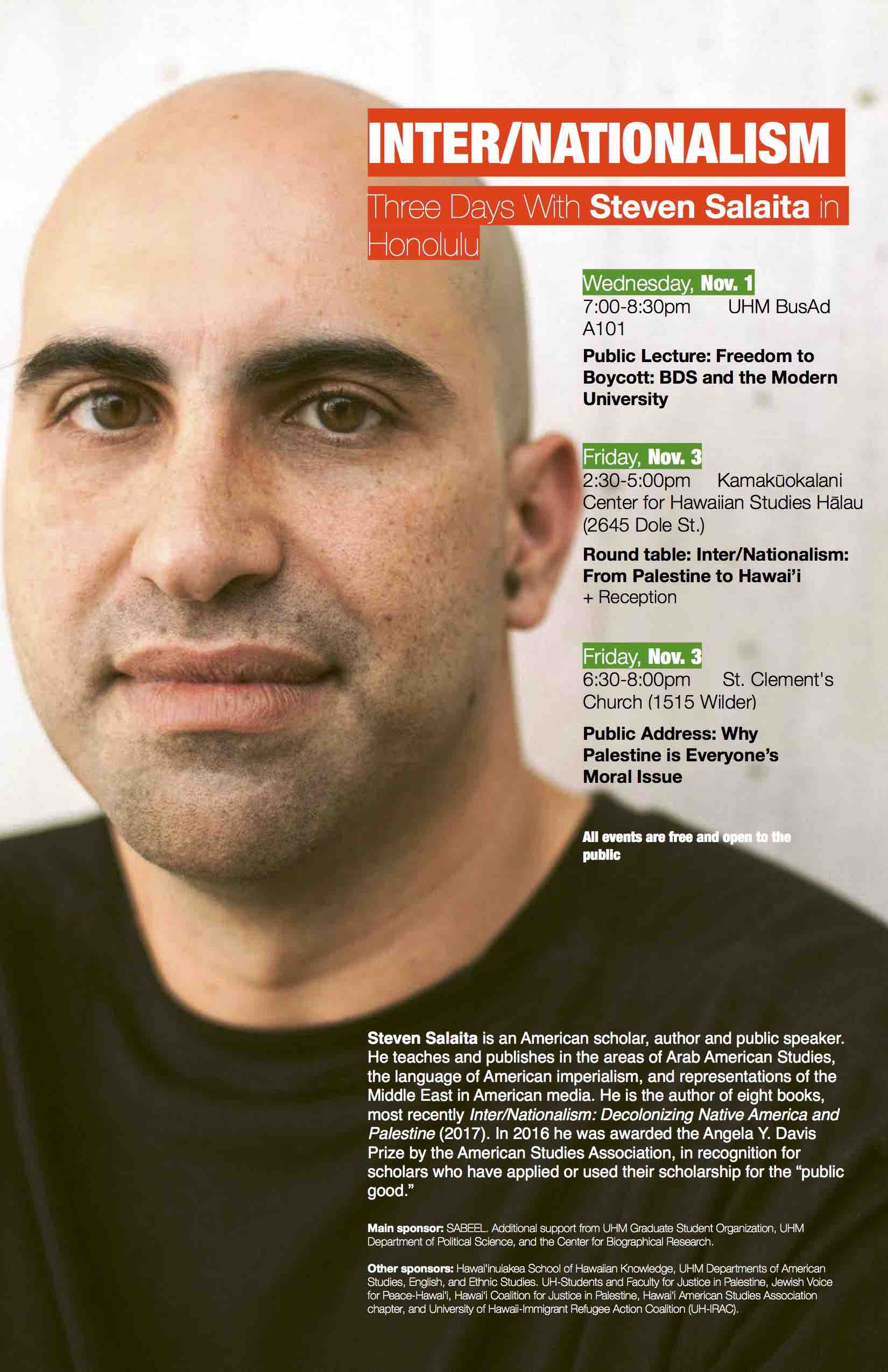 Roundtable with Steven Salaita, Ali Musleh, Ê»Ilima Long, and Kahala Johnson. Panelists will discuss sovereignty and solidarity in the context of HawaiÊ»i and Palestine.

Steven Salaita is an American scholar, author and public speaker. He teaches and publishes in the areas of Arab American Studies, the language of American imperialism, and representations of the Middle East in American media. He has held positions at Virginia Tech and University of Wisconsin-Whitewater, and served as the Edward W. Said Chair of American Studies at the American University of Beirut. He completed his Ph.D. at the University of Oklahoma in Native American studies with a literature emphasis. He is the author of eight books: Anti-Arab Racism in the USA: Where it Comes From and What it Means for Politics (2006), The Holy Land in Transit: Colonialism and the Quest for Canaan (2006), Arab American Literary Fictions Cultures and Politics (2007), The Uncultured Wars (2008), Modern Arab American Fiction: A Reader's Guide (2011), Israel's Dead Soul (2011), Uncivil Rites (2015) and Inter/Nationalism: Decolonizing Native America and Palestine (2017).

His latest book was just awarded the 2017 Arab American Book Award in the nonfiction category. He also won a 2007 Gustavus Myers Outstanding Book Award for Anti-Arab Racism in the USA. The Gustavus Myers Center for the Study of Bigotry and Human Rights recognized Salaitaâ€™s book as one that extends â€œour understanding of the root causes of bigotry and the range of options we as humans have in constructing alternative ways to share power.â€ He also has published many articles and reviews in refereed journals; he publishes prolifically as a journalist; and he gives invited lectures all over the world.

In 2016 he was awarded the Angela Y. Davis Prize by the American Studies Association, in recognition for scholars who have applied or used their scholarship for the â€œpublic good.â€ In announcing this award, the ASA committee stated, â€œThe manifest evidence of Steven's courage and principled refusal to bend in the face of so many forms of repression and intimidation makes him a worthy recipient of this award. We are inspired by his brilliance and fortitude, and his example lights the way for us all.â€