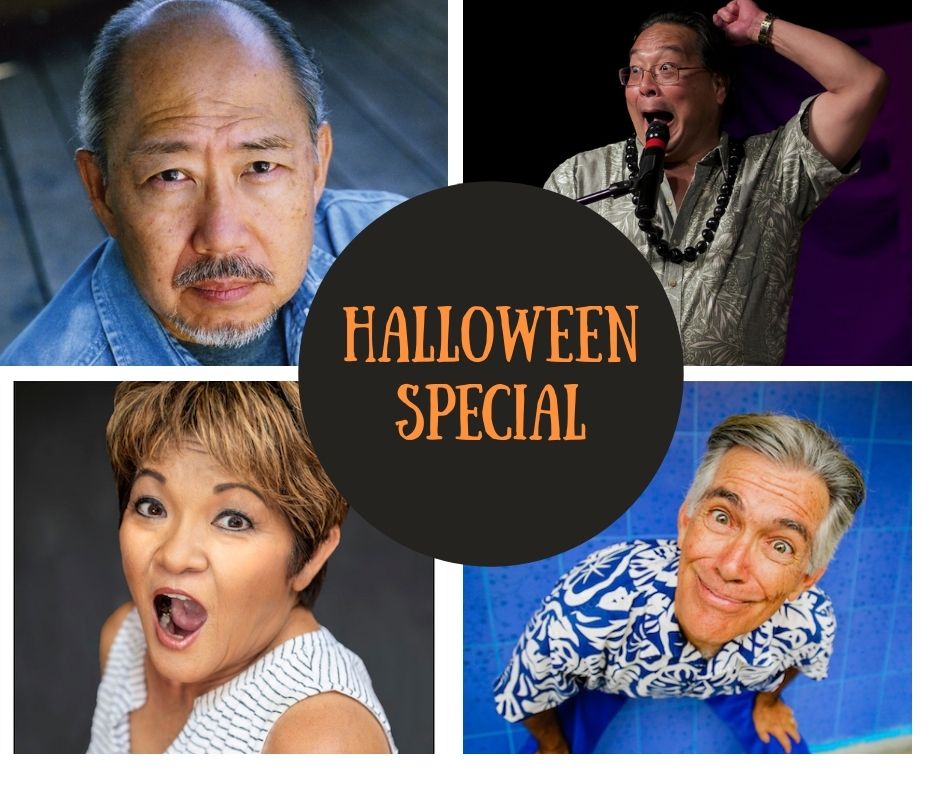 7:00 - Jeff Gere: Sensative
Born on Halloween, Jeff has been collecting local supernatural tales for 30 years. Here’s one about a Samoan gorilla who was posessed. One of Jeff’s favorite things to do in the world is freak people out with these tales. Hold ON! Listen in, but not alone.

7:15 - Kathy Collins: Botan Doro (The Peony Pavillion)
Since the age of 13, Maui girl Kathy Collins has performed as a storyteller, stage and film actress, radio and television personality, stand-up comic, emcee, and dancer. She is also a newspaper columnist (The Maui News) and freelance writer. With her pidgin-speaking alter ego, “Tita,” she has “talked story” across the state and the mainland, from the Hawaii Book & Music Festival to the Lincoln Center Out of Doors Festival.

7:30 - Dann Seki: White Lady, Miles and the Hinotama, Gimme Back My Head
Dann Seki is a stage and screen actor as well as a storyteller. He is a member of theScreen Actors Guild and American Federation of Television and Radio Artists. As an actor, he has appeared in numerous local commercials, television shows filmed in Hawaii and on stage at local theatres. A storyteller since 1994, he has performed statewide at libraries, senior centers and festivals.

7:45 - Alton Chung: Drowning at Waimea Falls Pond
Local boy, Alton Takiyama-Chung grew up with the stories, superstitions, and the magic of the Hawaiian Islands. He tells stories of the Plantation Days, the Japanese-American experience of WWII, Asian folktales, Hawaiian legends, and of course, ghost stories. He has been a featured teller at the National Storytelling Festivals, and at international storytelling festivals in the Cayman Islands, Singapore, Vietnam, India and Thailand.

The Fall International Storyteller Series is presented in conjunction with the Hawaii Book and Music Festival.