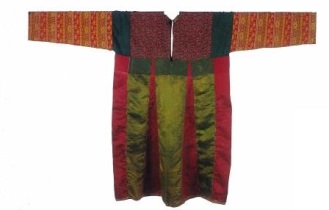 The Parsis, followers of Zoroastrianism, are a unique community found mostly in South Asia, where they emigrated from Central Asia/Greater Persia during the 8th through 10th centuries, when Islam was overtaking the region and marginalizing the once-dominant Zoroastrian religion. Although they are the smallest recognized ethnic group in India, the Parsis have been extremely important to Indiaâ€™s modernization and are well-known in industry, commerce, education, government and the arts.

In the 19th century, many Parsis moved to the bustling port of Bombay during the British colonial expansion and were instrumental in the British-dominated China trade, along with Parsi merchants living in Canton, China. They often acted as intermediaries for the English and eventually many entered professions within the British colonial administration. In recent times, the community has been shrinking until today there are only around 125,000 Zoroastrians worldwide, including 70,000 in India and around 25,000 in Iran.

This exhibition, presented by the East-West Center Arts Program in cooperation with Pheroza J. Godrej, Firoza Punthakey Mistree and Shangri La - Doris Duke Foundation for Islamic Art, focuses on Parsi textiles, highlighting aspects of the long and varied development of the Parsi community. Parsi clothing demonstrates elements borrowed from Iran, India, Victorian era England and China. The exhibit emphasizes the continuity of Parsi culture, giving insight into the Zoroastrian religion and its Persian roots, the history of the community, and its rich and complex culture.

Visitor parking is available on the UH-MÄnoa campus for a fee during the week, and is normally free and ample on Sundays.