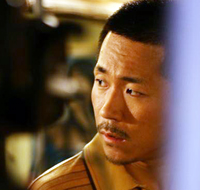 The Center for Korean Studies 2015 spring film seriesâ€“Castaway in Korean Societyâ€“presents a screening of the 2008 feature Breathless (ë˜¥íŒŒë¦¬), directed by Yang Ik-joon. The director of the film also plays the main character, a brutal and foul-mouthed debt collector who works for a loan shark. One day, he accidentally spits on a high school student who refuses to put up with his rudeness and demands an apology. She eventually makes her way into his life, and as his feelings, he considers leaving his gangster life behind.