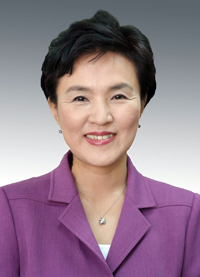 The Center for Korean Studies spring colloquium series presents a discussion of women and leadership by Kum-Sil Kang, senior advisor, One Law Partners. Kang served with distinction in the Korean judiciary for thirteen years, including serving as a judge of the Seoul High Court. In 2003, she became the fifty-fifth minister of justice of the Republic of Korea and served until 2004. In her present position, as senior advisor of One Law Partners, she has been active in the firmâ€™s continuing efforts to expand practice in the Peopleâ€™s Republic of China, as well as contributing to the growth of economic ties between the Republic of Korea and the Peopleâ€™s Republic of China. She is also representing the Jeju branch of the law firm and serving as a member of the selection committee for the Peace Prize awarded by the Jeju 4.3 Peace Foundation. Ms. Kang will speak about her personal experience and the importance of women in leadership positions in South Korea.