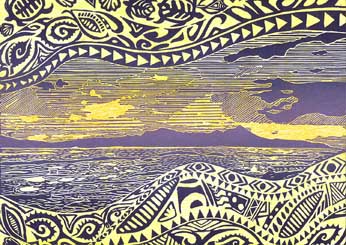 The Vie Du Pacifique II Print Folio 2016 is a collaborative project organized by Jennifer Sanzaro-Nishimura, an artist and a faculty member at Queensland College of Art, Griffith University. She conceived of the project to resist fear-driven politics that erect false racial and cultural barriers by creating possibilities for artists to have face to face contact in collaborative workshops and residencies throughout the Pacific region. The folio features works by artists from the Migaloo Press (Brisbane, Australia), Crow Street Creatives (Gladstone, Australia), Black Dolphin Workshop (California, US), Arm & Roller Press (Honolulu, US), Tama Institute of Art and Design (Tokyo, Japan), Studio Printmakers of Auckland (New Zealand) and Kastom Kollektiv (Vanuatu/Australia). It also includes a number of invited artists from South East Queensland.

Sanzaro-Nishimura has been a printmaker for over 26 years and works across most forms of print-media including, relief, intaglio, lithography in various forms, monotype, serigraph and digital. She is a faculty member at Queensland College of Art, Griffith University and completed a Doctor of Visual Arts at QCA in 2013. She was president of Impress Printmakers Studio Brisbane from 2008â€“14, facilitating their transition into Kedron Tramway Substation no 8 (now Impress Printmakers Studio and Gallery). She is a master printer commissioned to print for Judy Watson and Inkahoots. She also conducts printmaking workshops for community printmaking groups such as Flying Arts Alliance, Migaloo Press, and Cursing Crows Press (Jennyâ€™s home studio). She exhibits regularly in group and solo shows. Her work is held in public and private collections nationally and internationally.