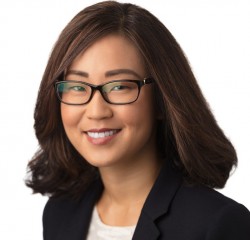 Cecilia Choi is the U.S. Department of Stateâ€™s Diplomat in Residence for southern California, Hawaii, and Nevada. She is responsible for recruiting talent to pursue a career in public service in global affairs. She is a visiting fellow at the University of California, Los Angeles. Ms. Choi was the director of trade and investment at the National SecurityCouncil serving under the Obama and Trump Administrations. She advised on tariffs, trade agreements, and U.S. export promotion. Ms. Choi was the deputy director in the U.S. Department of Stateâ€™s Bureau of Oceans and International Environmental and Scientific Affairs where she promoted innovation to address environment challenges. She also served as the food safety adviser at the Bureau of Economic and Business Affairs, promoting U.S. agriculture.

Prior to joining the government she worked in investor relations where she advised Fortune 500 companies on how to promote their publicly traded offerings. Overseas she was the economic counselor at the U.S. Embassy in Honduras. Her other overseas assignments were in South Korea and Turkey. She also coordinated the U.S.-Chile relationship, advancing U.S. interests on free trade and peacekeeping. Her foreign languages are Germany, Korean, Persian, and Spanish. Ms. Choi earned a masterâ€™s degree in development studies from the London School of Economics. She holds a bachelorâ€™s degree in economics and international relations from Claremont McKenna College in Claremont, California.

This session will include an introduction to the State Department, Internships with the State Department in Washington DC and Embassies Overseas, Fellowships for Language Study, Entry Level in the Consular Fellows Program, and Mid-Career Level in Foreign Service Careers and Hiring Path.