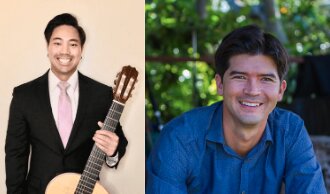 The Cardenas-O'Sullivan Duo connection goes back more than 10 years. In 2008, Ian O'Sullivan was a guitar instructor at 7th Fret Guitar Studios on Beretania St. where Aaron Cardenas was a student of another teacher and studio owner, Darin Au. For one reason or another that fateful Saturday morning, Ian was the substitute for Darin. At that time, Cardenas was still in high school and just beginning to hone his craft as a classical guitarist, but Ian could tell Aaron was destined for something special.

Fast forward to 2012, having just completed his Masters degree from Yale University, O'Sullivan would then become Mr.Cardenas' full-time guitar instructor at the University of Hawaii at Manoa. Thus further joining their paths. In 2017, Aaron would also be accepted to Yale University's Guitar Masters program under the tutelage of Professor Benjamin Verdery.

Starting in the summer of 2018 Cardenas and O'Sullivan would perform every year for the Benjamin Verdery Summer Masterclass on Maui. They have developed a deep musical understanding over the years and it shows in their chemistry on stage. Having worked together so intensely over the years, and having similar musical grooming at Yale, their musical intuition leads them to play the instruments like one and the same.