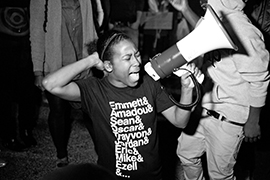 A free screening of the documentary film Whose Streets?

An account of the Ferguson uprising as told by the people who lived it. The filmmakers look at how the killing of 18-year-old Michael Brown inspired a community to fight back and sparked a global movement for justice. Whose Streets? is a powerful battle cry from a generation fighting, not for their civil rights, but for the right to live. www.whosestreetsfilm.com

Co-sponsored by the Ethnic Studies Student Association and the University Students of Urban & Regional Planning.