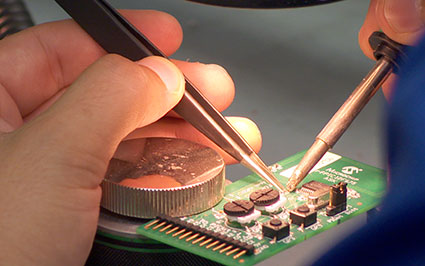 The University of Hawaiʻi’s proof of concept center/venture accelerator XLR8UH was recently awarded a $500,000 grant from the Economic Development Administration (EDA) to expand its successful commercialization efforts statewide, including underserved rural communities on the neighbor islands.

“We are pleased that the EDA recognized the value and promise of our XLR8UH program,” said Vassilis L. Syrmos, UH vice president for research and innovation. “The University of Hawaiʻi will be matching the EDA award to amplify even more of XLR8UH’s reach in extending our research innovation and commercialization efforts across the state.”

The grant is part of the EDA’s 2015 Regional Innovation Strategies Program, a cutting-edge federal program that supports initiatives to spur innovation commercialization, entrepreneurship and job creation at the local level. XLR8UH is one of just 17 i6 Challenge awardees to receive grants totaling $8 million. The funding will enable XLR8UH to introduce new activities utilizing regionally developed intellectual property, entrepreneurs and startups.

“Our XLR8UH program is a vital component of our work to advance the Hawaiʻi Innovation Initiative, and this significant grant from the EDA, following on our recognition by the SBA validates the confidence in our new directions,” said UH President David Lassner. “By developing talented entrepreneurs from among our faculty and students and fortifying the innovation ecosystem at UH, we are playing a key role in Hawaiʻi’s efforts to diversify our economy, create high-quality jobs and build the foundation for new revenue sources.”

Launched in 2014, XLR8UH is a first of its kind proof of concept center/venture accelerator developed by the University of Hawaiʻi with Sultan Ventures, a boutique venture firm which also manages it. The proof of concept center educates, mentors and invests in UH research and talent, ranging from students to post docs, faculty and alumni. It is one of the first public university investment programs in the nation, revolutionizing the way innovation and research is commercialized. Last year, XLR8UH was recognized as one of the nation’s leading accelerators by the U.S. Small Business Administration’s Growth Accelerator Fund Competition.

“There is pent up demand for entrepreneurial training in Hawaiʻi, and this $1 million boost will make a significant difference in XLR8UH’s ability to reach out to even more communities across the Hawaiian Islands,” said Omar Sultan, co-founder and managing partner of XLR8UH.

Under the XLR8UH program, participants receive hands-on training and resources through the three-phased program branded Lean, Build, Pitch™ as well as the opportunity to pitch at “Demo Days” in both Honolulu and in Silicon Valley. To date, the XLR8UH program has developed 15 companies that currently employ 67 individuals. These startups have already generated over $600,000 in revenue and have raised $7.8 million in total funding.

About the i6 Challenge

Launched in 2010, the i6 Challenge is part of the Startup America Initiative, and is now in its fifth iteration. The i6 Challenge is a national competition that makes small, targeted high-impact investments to support startup creation, innovation and help turn technology into jobs. The funding supports the development and expansion of new and existing proof-of-concept and commercialization centers, which help innovators fine tune and scale their innovations to bring new products and services to the market.