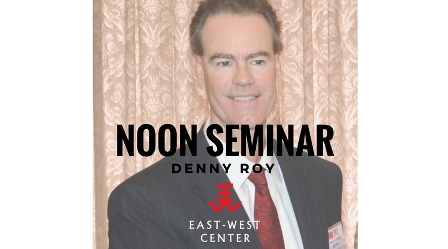 For the past decade Taiwan has been the quiet East Asia â€œflashpointâ€ compared to North Korea and the East China Sea. But the situation that previously produced three Taiwan Strait crises remains unresolved, and with China newly emboldened under Xi Jinping and the independence-leaning party in power in Taipei, a fourth crisis may be brewing.

This seminar will review and update the major trends affecting Taiwanâ€™s national security, including the policies of China and the United States, and assess the prospects for Taiwan retaining its autonomy against Chinese pressure to politically unify with the Peopleâ€™s Republic of China.

Denny Roy has been a senior fellow with the East-West Center since 2007. He is the author of Taiwan: A Political History (Cornell University Press, 2003). His latest book is Return of the Dragon: Rising China and Regional Security (Columbia University Press, 2013).