Bollywood Mondays: 'Lipstick Under My Burkha' (2016) 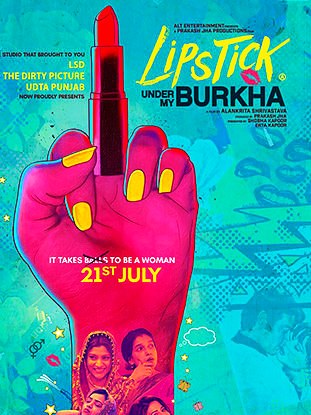 'Lipstick Under My Burkha' chronicles the stories of four Indian women (played by a stellar ensemble cast), whose loosely connected lives in the regional city of Bhopal are united in the women's individual rebellions against a patriarchal world. It is a bold, creative, necessary, and controversial film.

Unsurprisingly, the Indian Censor Board did battle with the movie's female director, Alankrita Shrivastava, dragging its own mission down in a farcical way (for example, decrying that the film is "too lady oriented"). 'Lipstick Under My Burkha' was finally released across India in 2017 following a highly successful run on the international film festival circuit, marking a victory for artistic freedom and for candid expressions of women's struggles and desires in life and cinema.

This is the final movie in the 17th UH Bollywood film series, this spring running one Monday afternoon per month. For a copy of the full film series schedule for the semester, please see the contact information below.