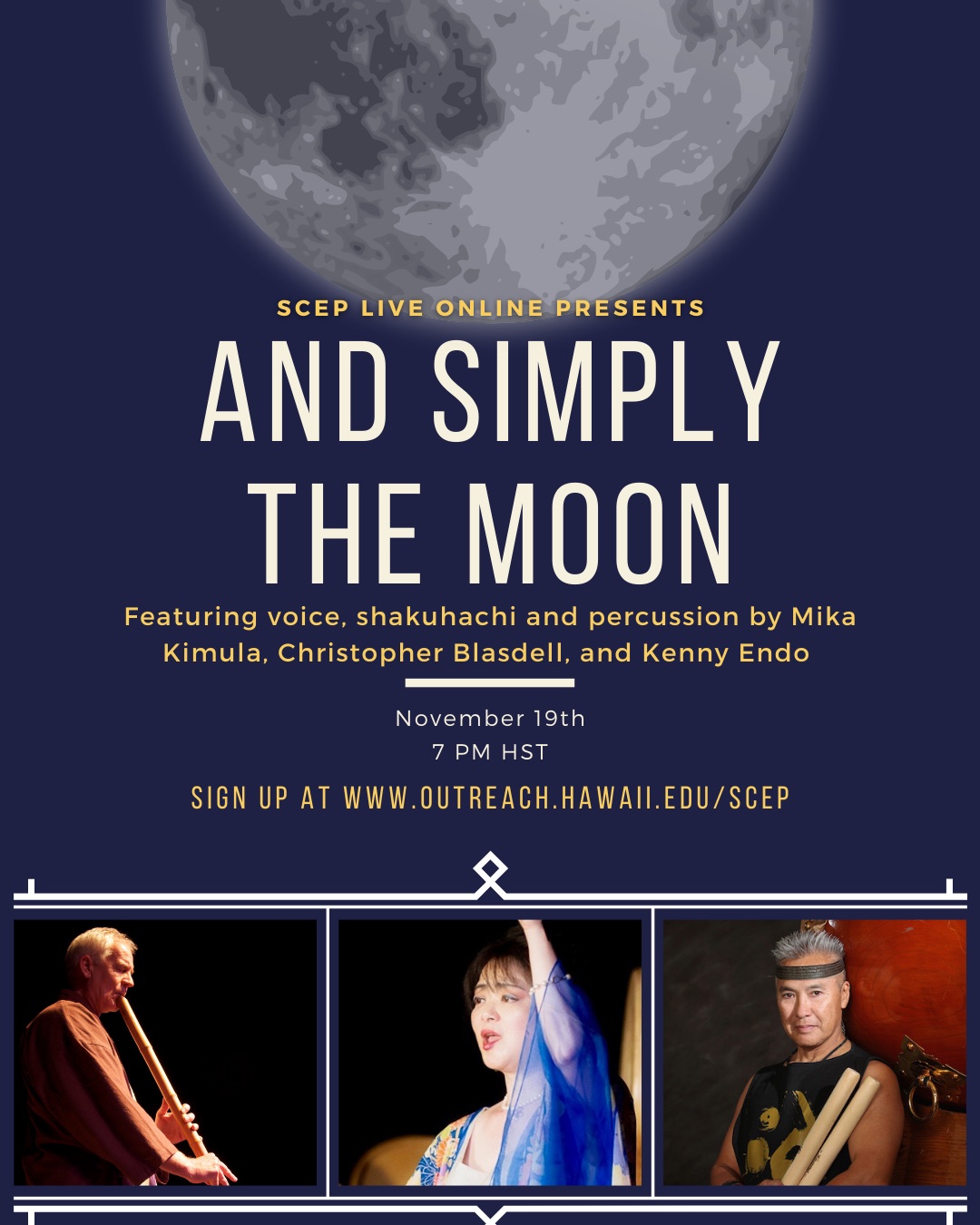 Featuring Voice, Shakuhachi, and Percussion with Mika Kimula, Christopher Blasdell, and Kenny Endo A limited number of seats are available for purchase to view this performance live at UH Mānoa Orvis Auditorium. Tickets are $30. Online viewing of this event is also available for a small fee. Artist Bios: Christopher Yohmei Blasdel came from the US to Japan in 1972 and began studying the shakuhachi and Japanese music with Japan’s Living National Treasure Goro Yamaguchi. He continued with the master until his death in 1999. In 1982, Blasdel received his MFA in ethnomusicology from Tokyo University of Fine Arts. In 1984 he received a teaching license and was conferred a professional name (Yohmei) from Yamaguchi—one of only two non-Japanese to be recognized by Yamaguchi. Blasdel resides in Hawai’i but performs and teaches around the world. He has released several CDs and published two major books and numerous articles on the shakuhachi and Japanese music. He has also help organized various world shakuhachi festival throughout the years. Presently, he is an adjunct lecturer at the University of Hawai’i, Manoa. He also holds a 5th degree black belt in Aikido. Kenny Endo is one of the leading artists in contemporary taiko and percussion. He is at the vanguard of this genre, continuing to pave new paths in Japanese drumming even after forty years as a career taiko artist. A performer, composer, and teacher, with numerous awards and accolades, Kenny is a consummate artist, blending taiko with rhythms influenced from around the world into original melodies and improvisation. He is arguably one of the most versatile musicians in the genre, crossing easily between classical Japanese music and his own neo-traditional, globally inspired variety. Mika Kimula specializes in Japanese song composed during the process of Westernization and modernization of post 19th Century Japan. She began studying voice at the Tokyo University of Arts, where she studied Italian classical and modern songs and performed experimental works using Japanese words and lyrics. From there, her interests evolved to Twentieth Century Japanese vocal compositions and traditional Japanese singing styles such as noh chant and nagauta singing. From 1997 to 1998, she was a Fulbright Scholar in Residence at Chatham College (PA) with the researching subject, “How to teach Japanese songs to American (non-Japanese) undergraduates.” From 2001 to 2020, she lectured at Ferris University in Yokohama. Her recorded works include the CD, Vocal Music in Twentieth Century Japan–The Inner Revolution between Silk and High Tech (Teichiku Records) and the DVD & Book, Japanese Voices ?A Video Archive of Singing and Techniques in the Japanese Language (Osaka Univ. of Arts, AD POPOLO Inc., 2008), which features the singing styles of 79 representative Japanese singers (including Kimula) from 32 genres. She also translated the explanatory booklet into English. The concert series is a joint effort between UH Mānoa Outreach College, UH Mānoa Music Department, the East-West Center Arts Program, and Friends of Mānoa Library.