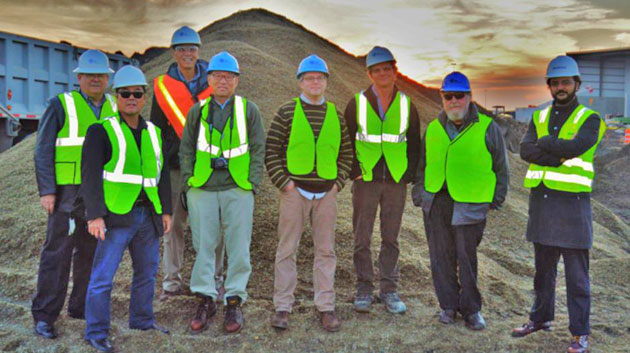 Sandy, the most devastating storm to hit the northeastern U.S. coast in decades, struck in late October 2012. Staff from both the University of Hawaiʻi at Mānoa and Honolulu Community College were called to action in the days following the disaster.

From November 29 to December 6, 2012, UH Mānoa team members from the National Disaster Preparedness Training Center (NDPTC), Sea Grant and the Urban Resilience Lab traveled to the most severely damaged areas in New York City and New Jersey coastal communities to support the Federal Emergency Management Agency and the National Oceanic Atmospheric Administration’s recovery efforts. The team assessed and documented damage and met with community leaders, emergency responders, hazard planners and those involved in relief and recovery efforts. Coastal storm surge, flooding and infrastructure failure were the main causes and consequences of Sandy’s impact.

Team efforts were led by Professor of Urban Planning Karl Kim, who is NDPTC’s executive director; along with Sea Grant’s Dennis Hwang, a coastal geologist and land use attorney; and Urban Resilience Lab’s Dean Sakamoto, an architect and lead developer of NDPTC’s HURRIPLAN, a new training course on hurricane resilient planning and design.

“Some areas such as Staten Island, the Rockaways and in New Jersey experienced massive devastation and will require much effort to recover,” said Kim. “We must do a better job planning and building disaster resilient communities. It shows us that no place is immune from the forces of nature.”

During her three weeks of service, Kukulies was assigned as a client caseworker overseeing the Northern region of the state of New Jersey that encompasses 11 counties. She managed a team of approximately 80 caseworkers who were in the field assisting families and individuals offering resources and getting victims on to the path of recovery.

“By sharing these real-world experiences with my students I hope to teach them valuable life lessons about how to deal with crises conflict, be able to successfully collaborate with one another, and be an effective project manager.”