The college renamed the 18,000 square foot building after the late senator at a dedication ceremony in October 2013.

Senator Daniel Inouye considered the school’s electronics technology program to be an important piece of his vision of making Hawaiʻi a leader in technology in the Pacific region—a vision that included making sure the state is able to educate its citizens for the high paying jobs the high-tech industry would create.

“You know we are kind of a rural community here on Kauaʻi, and our primary mission was to train technicians for Kauaʻi and especially for PMRF,” said retired Kauaʻi CC Professor Francis Takahashi, referring to the Pacific Missile Range Facility. Takahashi founded the electronics technology program at the college.

Inouye did whatever he could to support PMRF and the program.

The school’s photonics and optics laboratory would not be in existence today without the work of Inouye.

“He got Boeing to donate an entire laser lab to our program,” said Takahashi. “Boeing sent a 40-foot container with 12,000 pounds of equipment and that was the start of our photonics program.”

The Inouye Technology Center also houses the Hawaiʻi Space Flight Laboratory, which the late senator played a role in creating, along with an electronics and computer lab, fabrications and assembly lab and a Cisco Academy Networking lab. Graduates enter the workforce as technicians or IT professionals, can transfer to four-year programs and are prepared to take globally recognized certification programs through the Cisco Networking Academy.

Inouye’s family said the late senator was extremely proud of the program.

“This is sort of a good example of that core belief that he had that each generation can get better,” said Inouye’s son, Ken Inouye. “And the greatest generation is probably yet to come and it will probably come from this place.” 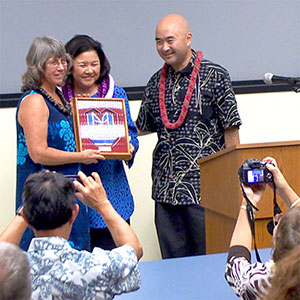 During the dedication ceremony, the Inouye family presented the college with one of Inouye’s most cherished awards, the Franklin D. Roosevelt Freedom from Fear Medal, given to him in 1997.

“It does represent what his view on life was, that we can do anything if we try,” said Inouye’s widow, Irene Hirano Inouye. “So we do hope that the medal will be a reminder to students that they should be fearless, they can be fearless and that anything is possible.”

No one represented that better than the late senator.

“To have his name on this building and to keep that legacy alive, it helps our students realize they can go anywhere, they can do anything, and that Kauaʻi really is at the forefront of this field,” said Kauaʻi Community College Chancellor Helen Cox.