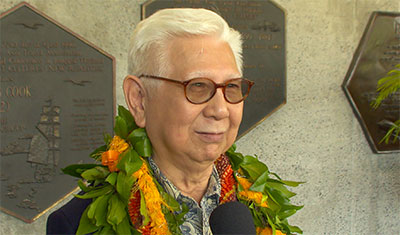 Chuck Yim Gee, the former longtime dean of the University of Hawaiʻi at Mānoa School of Travel Industry Management, is now a member of a very small and distinguished group—the Pacific Asia Travel Association Gallery of Legends.

The gallery is on display in the central breezeway of the Honolulu International Airport. Gee joins other pioneers and visionaries including the founder of Pan Am Juan Trippe, Conrad Hilton of Hilton resorts, novelist James Michener and Walt Disney.

“For a humble educator to join this distinguished group, it is a lot to take in,” said Gee.

Gee, a UH regent from 2009 to 2015, served as dean of the School of Travel Industry Management from 1976 until his retirement in 1999. The Pacific Asia Travel Association honored him for his lifetime achievement in establishing an important human legacy for the worldwide travel industry through education, training and research.

“We know that this is an industry—the travel industry is one that is built on services, human services, and is a very technologically advanced industry,” said Gee. “It relies on human connections, it relies on heritage, culture.”

He has received numerous international honors and awards for his work throughout the years, but he is proudest of the impact UH and its graduates have had, and continue to have, on the tourism industry.

“You need a lot of talented people and you need not just people who have functional skills, you need the chefs, you need the people who know how to run the hotels but most of all you need visionaries, you need leaders, and that’s what I think we do at the University of Hawaiʻi.”