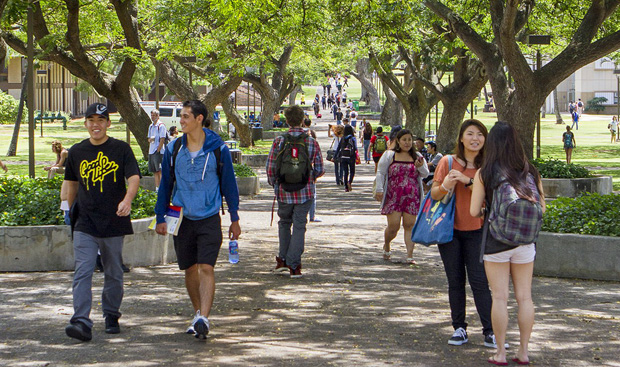 The University of Hawaiʻi at Mānoa is ranked number 20 among medium schools on the Peace Corps’ 2016 Top Volunteer-Producing Colleges and Universities list. There are 14 Rainbow Warrior alumni currently volunteering worldwide.

“The Peace Corps is a unique opportunity for college graduates to put their education into practice and become agents of change in communities around the world,” Peace Corps Director Carrie Hessler-Radelet said. “Today’s graduates understand the importance of intercultural understanding and are raising their hands in record numbers to take on the challenge of international service.”

“The University of Hawaiʻi at Mānoa is proud to be recognized as a top volunteer-producing university for the Peace Corps,” said Reed Dasenbrock, vice chancellor for Academic Affairs. “This ranking demonstrates our alumni’s commitment to service and civic engagement, both here in Hawaiʻi and around the world.”

This year’s rankings follow a 40-year high in applications for the Peace Corps in 2015. This record-breaking number of applicants comes after the first full year that the agency’s historic application and recruitment reforms have been in place. Applicants will now find a simplified, more personal application process, and can learn more by reaching out to the West regional recruitment office by clicking here.

The Peace Corps ranks its top volunteer-producing colleges and universities annually according to the size of the student body. View the complete 2016 rankings of the top 25 schools in each undergraduate category here.