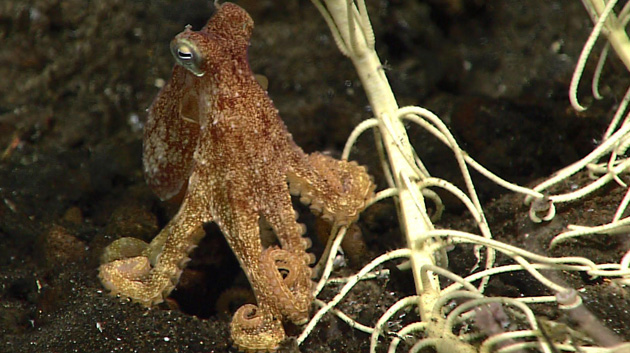 The National Oceanic and Atmospheric Administration Ship Okeanos Explorer will begin the third of three cruise legs to explore the deepest oceanic trench on the planet, the Marianas Trench in the western Pacific. Leg 3 will take place June 16–July 10, as the exploration team maps and explores the northern part of the the Marianas Trench Marine National Monument and the Commonwealth of the Northern Marianas Islands.

Anyone with an internet connection can virtually explore the deep sea with scientists and researchers from their computer or mobile device. Live streaming video is available during each and every dive starting on June 17.

Patricia Fryer, geology professor in the University of Hawaiʻi School of Ocean and Earth Science and Technology is on-board for Leg 3. She is a veteran of 46 marine research expeditions, often in the role of chief scientist, and her research has focused on the very deepest parts of the Mariana Trench, including the question of why the Challenger Deep is so deep.

During this expedition, the exploration strategy of the Okeanos Explorer will be employed—seafloor mapping using multibeam sonar; water column exploration using a conductivity, temperature and depth profiler; and remotely operated vehicle imaging and video using the ROV Deep Discoverer. Scientists from around the world will be participating in the explorations in real time through telepresence technology as they investigate the biological habitats and geologic history of the region.

In the Hawaiʻi Institute of Geophysics Building at UH Mānoa, NOAA and UH Mānoa’s School of Ocean and Earth Science and Technology established an Exploration Command Center—a location where live video feeds from the ship and ROVs are displayed and scientists on land can communicate with the ship-board team, enabling tele-presence collaboration.

This expedition is part of a major three-year effort to systematically collect information to support science and management needs within and around the U.S. marine national monuments and NOAA’s national marine sanctuaries in the Pacific.

Learn more about the current expedition on the NOAA website for the 2016 Deepwater Exploration of the Marianas.

Highlight videos from the first leg of the exploration are available, including videos of a city of basket sea stars, a dandelion siphonophore and an unidentified jellyfish.