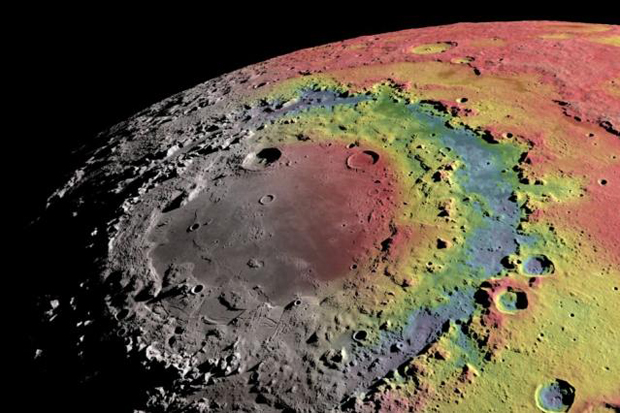 An international team of scientists, led by researchers at the Massachusetts Institute of Technology (MIT), have reconstructed the extreme collision that created one of the moon’s largest craters, 3.8 billion years ago. Jeffrey Taylor, a professor in the University of Hawaiʻi at Mānoa School of Ocean and Earth Science and Technology, was among the scientists who retraced the moon’s dramatic response in the first hours following the massive impact, and identified the processes by which large, multi-ring basins can form in the aftermath of such events.

The findings, published in two papers in the journal Science, may shed light on how giant impacts shaped the evolution of the moon, and even life on Earth, shortly after the planets formed.

The team’s results pertain to the moon’s Orientale basin, an expansive, bull’s eye-shaped depression on the southwestern edge of the moon, just barely visible from Earth. The basin is surrounded by three concentric rings of rock, the largest one stretching 580 miles across—about six times as wide as the Big Island of Hawaiʻi. Until now, it’s been unclear how massive impacts produced the complex structures displayed by multi-ring basins.

Probes on NASA’s Gravity Recovery and Interior Laboratory (GRAIL) spacecraft took measurements of the basin’s gravity field at high spatial resolution, providing scientists with a precise map of the moon’s interior mass distribution which enabled the researchers to make revealing geophysical observations and develop a computer model to re-create the impact and its effects.

Taylor’s role in the mission focused on integrating information about the composition of the crust in and around the Orientale Basin into the interpretation of the gravity data.

In one of two Science papers, Maria Zuber, vice president for research and the E.A. Griswold Professor of Geophysics at MIT and her colleagues analyzed GRAIL’s gravity field measurements and were able to solve a key mystery, namely, the size and location of the basin’s transient crater, which is the initial depression created when an asteroid blasts material out from the lunar surface.

The researchers determined that the 3.8-billion-year-old basin was created by a huge impactor that punched an initial, transient crater into the lunar surface, measuring up to 285 miles in diameter. This impact, the researchers calculated, sent at least 816,000 cubic miles of pulverized lunar crust flying out from the impact site—an amount equivalent to 135 times the combined volume of the Great Lakes.

In the second paper, led by Brandon Johnson, assistant professor at Brown University, the team created a computer simulation to reconstruct the first hours following the initial impact that created the Orientale basin. The team ran the simulation multiple times, with varying conditions, until the final basin and its concentric rings matched the observations made by GRAIL.

Based on these simulations, the team estimated that the basin was carved out by a 40-mile-wide object that collided with the moon at about 9 miles per second, or 32,400 miles per hour. The impact pulverized the underlying crust, and the propagation and subsequent unloading of the shockwave caused material to rise up, then crash back down, sloshing back and forth in a wave-like fashion for the next two hours. The material eventually settled back to the surface in the pattern of the basin’s two outermost rings, each rising several kilometers high.

The Orientale basin is considered a relatively pristine example of what the moon and the Earth experienced during a period in which the solar system was dominated by large, catastrophic impacts.

“Ultimately, what this tells us is that the early history of the planets, at the time life was developing on Earth, was an extraordinarily hostile environment,” Zuber says. “There were extreme, energetic events that produced remarkably difficult environmental conditions. Maybe that’s why life is as tenacious as it is, because life forms somehow developed in the time subsequent to these catastrophic events. They were tough little buggers.”

This research was supported by the NASA Discovery Program.