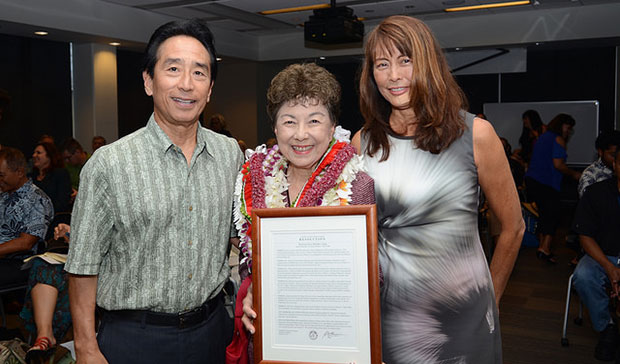 The University of Hawaiʻi Board of Regents honored former UH West Oʻahu Interim Chancellor Doris Ching in a resolution at the January 26 meeting. Ching was recognized for her more than 40 years of service at the university as an administrative and educational role model and champion for UH students.

In 2015, Ching graciously came out of retirement to lead UH West Oʻahu, first as the interim vice chancellor of academic affairs, and then as the interim chancellor. Prior to her first retirement, Ching served as associate professor in education, associate dean of UH Mānoa College of Education, and then the first woman vice president for student affairs, all the while serving on accreditation teams, and many other national boards and commissions.

Ching has been described by her peers as a “tireless advocate of excellence, equal rights, diversity and success for all students,” and her pioneering work gained her numerous awards at home, including Manager of the Year, College of Education Distinguished Alumnae Award and the Hawaiʻi Okinawa Association’s Legacy Award; and on the national front, as the first woman of color and first Asian American Pacific Islander elected president of the National Association of Student Personnel Administrators (NASPA) and the NASPA Foundation.