Leaders representing all 10 campuses of the University of Hawaiʻi kicked off a two-day planning session to craft a strategy to encourage thousands of former UH students to return to school to earn their degree.

According to the 2016 Hawaiʻi State Data Book, about 95,000 25–44 year olds in Hawaiʻi have some college credits but not a degree. UH is planning a statewide campaign to help more of those former students complete their post-secondary degree or certificate.

“From national and Hawaiʻi data, we know that higher education matters in providing choices, more secure employment, higher wages, better health and more civic engagement,” said UH President David Lassner. “We have the responsibility and opportunity to provide higher educational opportunity and develop the workforce and community solutions for Hawaiʻi.”

The Lumina Foundation reported that today’s students are less likely to get a job that pays livable wages or reach their full potential. The report estimated that high school graduates would miss out on $500,000 in earnings by not getting an associate’s degree and $1 million over a lifetime by not earning a bachelor’s degree.

Lassner opened the January 18 session acknowledging existing campus efforts and the workforce needs of the community in the not-so-distant future. He said planning was key to encouraging adults who already have college credits to return to school. First target is students who attended UH for an undergraduate degree within the last five years but left school, or stopped out, without a degree or a certificate. UH is initially targeting 34,031 of these former students, in a multi-year, multifaceted effort to return and complete their degrees.

Helping working age adults earn degrees will help the state to meet its “55 by ‘25” goal that 55 percent of working-age adults should have a two-or-four-year degree by 2025 to ensure international economic competitiveness. The Georgetown University Center on Education and the Workforce projected that by 2020, 70 percent of the job openings in Hawaiʻi will require a postsecondary credential.

During the last decade, significant efforts and progress have been made in improving Hawaiʻi’s educational pipeline. UH’s Hawaiʻi Graduation Initiative has increased on-time completion and focused on achieving equitable outcomes for underrepresented students. In 2017, the Hawaiʻi State Legislature funded Hawaiʻi Promise to support college affordability at community colleges, and UH has actively participated in national networks to improve educational outcomes, such as Achieving the Dream and Complete College America.

“Re-engaging “stopped out” students, who previously invested time and resources into earning a degree, is critical to reach the state’s educational goal,” said Tammi Chun, Office of the Vice President for Community Colleges.

The session included a presentation by Sean Tierney, Indiana associate commissioner for higher education, about Indiana’s “You Can. Go Back” campaign, which targeted 750,000 former students who have some college credits but no degree. Indiana’s program reached out directly to prospective returning adults with a variety of programs and incentives including $1,000 state-funded scholarships, flexible class schedules, online courses, debt-forgiveness programs and other support for working adults. Indiana credits its campaign for 9,000 students returning to complete their degrees in the last two years. Similar efforts have been launched by universities and states nationwide.

Another presentation focused on how to improve the college experience for returning adults. A training team from the Aulani, A Disney Resort and Spa, where day one of the workshop was held, provided details on the resort’s intentional design and customer service for a world class guest experience.

Lassner said it is important to understand how to reach the former students, their goals and the support they need to finish school. “What mode of classes, what programs will be most effective for them and how do we make the experience inviting.”

UH is using the lessons learned from the workshop as well as the prior campus efforts to develop programs and a statewide campaign to re-engage and support stopped out students. 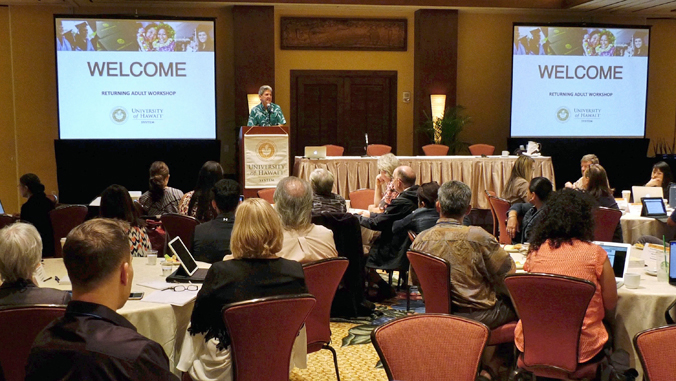