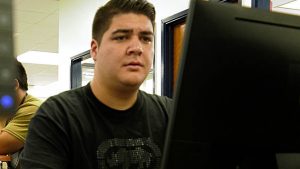 Kalaheo Macadangdang is finishing something he started in 2011, the year he graduated from Baldwin High School on Maui. He is pursuing an associate degree in liberal arts at University of Hawaiʻi Maui College.

“I decided to take a break from school, which was supposed to be a semester, ended up being a year and a half,” said Macadangdang. He was only three credits shy of earning his degree but life happened. Macadangdang began working at Hawaiian Airlines in 2013 where he is now a flight attendant. One day in December 2017, he got a postcard from UH Maui College.

“I got this awesome offer to come back to school and they offered the first class for free,” said Macadangdang.

That offer is part of a UH Community Colleges pilot project targeting “stopped out” students—former students who have earned some college credit but no degree. Macadangdang was one of 969 stopped out students identified from UH’s seven community colleges. They had been out of school for two years or less and had already earned at least one semester’s worth of credits.

“We emailed, we sent out postcards, we did phone calls,” said Kyla Wayas, a UH Maui academic counselor. Macadangdang was one of 150 stopped out students who decided to return and who received their first three-credit class for free.

“There was no hesitation,” said Macadangdang. “I was looking forward to trying to get back to school. I did not know exactly when, but this was a big pusher.”

“They just needed that little nudge, okay, I have this opportunity, I should take advantage of it and come back to college,” added Wayas.

There are a lot of stopped out students in Hawaiʻi—about 95,000 between the ages 25 and 44, according to state statistics from 2016. UH is planning a campaign to target about 34,000 of its stopped out students in a multi-year effort to get them to come back and complete their degrees. A community college graduate is estimated to make a half million dollars more over their lifetime compared to high school graduate. That increases to a million more over a lifetime, for a graduate with a four year degree.

As for Macadangdang, he’s only just getting started.

“I have about a year and a half to finish my bachelor’s degree in business administration through West Oʻahu and I eventually plan to be a pilot for Hawaiian Airlines,” he said.