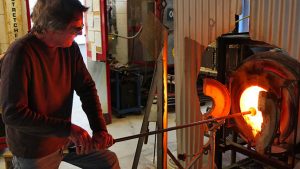 University of Hawaiʻi art alumnus Robert Bento finally accomplished something he has been trying to do for a while: Bring his entire art class at Molokaʻi High School to Oʻahu for a field trip.

And what a field trip! Six Molokaʻi High seniors spent a half-day at the UH Mānoa Department of Art and Art History on February 16. They watched a demonstration of glass blowing by art Professor Rick Mills, got hands-on experience in the art of printmaking with help from graduate student Soo Mei Teh and Helena Noordhoff, who expects to get her bachelor of fine arts degree in May. The Molokaʻi students also toured the ceramics facility.

And thatʻs not all. The Molokaʻi students watched Fights & Delights: Three Chinese Comedies at UH Mānoa’s Kennedy Theater, visited the Honolulu Museum of Art Spalding House and Shangri La Museum of Islamic Art, Culture and Design, and attended a concert at Hawaiʻi Public Radio’s Atherton Performing Arts Studio. On top of that they went to eat dim sum, which is apparently difficult to find on Molokaʻi.

“I just wanted to expose these kids, who are from a much smaller universe if that’s what you want to call it, than being over here on Oʻahu,” said Bento, who earned both his degrees at UH Mānoa (a bachelor of fine arts in 1981 and a master of fine arts in 1991). “They donʻt get to see facilities like this.”

The students also were looking for ideas for a sculpture they want to make as a gift to Molokaʻi High. “I wanted them to get some bigger ideas and be exposed to some bigger ideas, so UH campus offers a lot of that,” Bento said.

Molokaʻi High senior Aliana Eustaquio said the trip would help cultivate their creativity. “We already have a sketch and everything, but Mr. Bento said maybe this can open your eyes just a little bit more and open the door just a little bit wider, so weʻre hoping to get a lot of ideas,” she said.

Eustaquio plans to attend Kapiʻolani Community College next fall. She wants to be a teacher for the hearing impaired and eventually return to Molokaʻi to provide that much needed service.

“I want to see that reaction on other students’ faces, that, oh, I get this, oh, I actually like coming to school,” she said.

Molokaʻi High senior Camille-Paige Ledesma said she enjoyed the different perspectives that she and her fellow students encountered, and seeing the effort and thought people put into their art.

When asked to describe in one word how he hoped his students would remember this trip, Bento answered, “Inspiring.”