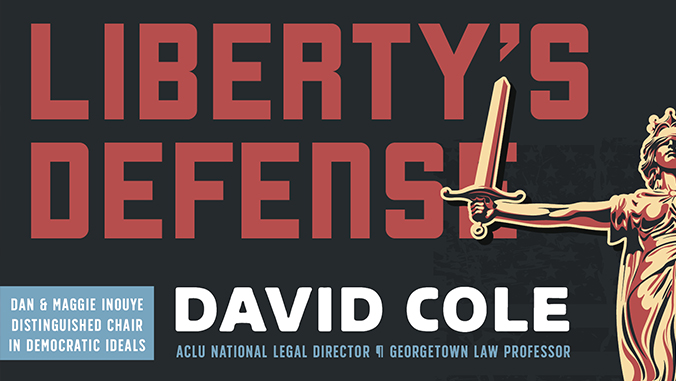 The national legal director of the American Civil Liberties Union (ACLU), has been named the University of Hawaiʻi at Mānoa Dan and Maggie Inouye Distinguished Chair in Democratic Ideals. David Cole will present a keynote lecture on Liberty’s Defense: Lessons from the Legal Resistance at 7 p.m. on Thursday, February 28, in the UH Mānoa Orvis Auditorium. Admission is free and open to the public.

Cole supervises a network of nearly 2,000 attorneys and oversees more than 1,400 state and federal lawsuits. He has litigated extensively before the U.S. Supreme Court and has won important cases on immigration, free speech, education and extrajudicial detentions.

He is the George J. Mitchell Professor in Law and Public Policy at Georgetown University, an influential essayist and the author of several award-winning books: Less Safe, Less Free, Enemy Aliens and No Equal Justice.

As the Dan and Maggie Inouye Distinguished Chair in Democratic Ideals, Cole will speak on assaults on civil liberties in Washington, from immigrant rights to LGBT equality, as well as his views on necessary steps to preserve the vitality of American democracy. He follows in a long line of illustrious visitors to Hawaiʻi, including: John Hope Franklin, dean of African American history, civil rights icon Angela Davis, business executive Richard Parsons, and esteemed economist Christina Romer.

Doors to the February 28 lecture at Orvis Auditorium will open at 6:30 p.m. for the 7 p.m. event. Seating is on a first-come, first-served basis. On-campus parking is available for $6. There will be an ASL interpreter present at the event. The event will also be live streamed.

The keynote lecture is co-sponsored by the Department of American Studies and the William S. Richardson School of Law with support from the ACLU of Hawaiʻi.

Other events being planned include talks at UH Maui College, UH West Oʻahu and with the ACLU of Hawaiʻi.