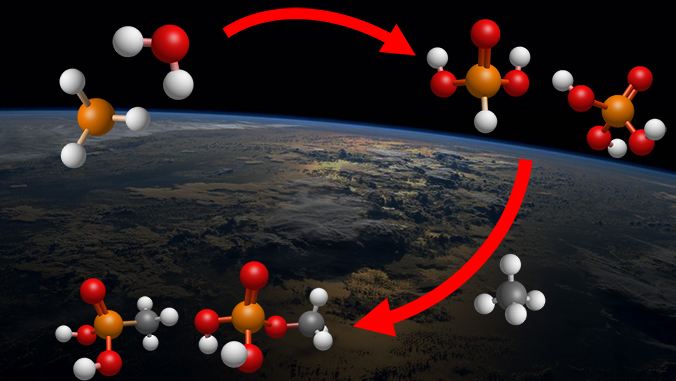 The answer to “How did the first organisms on Earth incorporate the critical element phosphorus?” has been a quandary for researchers, but, University of Hawaiʻi at Mānoa physical chemists believe a meteoric visitor could be the critical link. Phosphorus is a key element for the molecules that compose all living organisms and helps form the backbone of DNA molecules, cell membranes (phospholipids), even bones and teeth. However, most phosphorus on Earth is bound in a state that does not allow for easy release or access. Modern organisms have evolved to extract the limited supplies of phosphorus in water.

UH Mānoa physical chemists in collaboration with colleagues from France and Taiwan have suggested that alkyl phosphonic acids, which are the only known phosphorus-containing organic compounds of extraterrestrial origin and were delivered to Earth on the Murchison meteorite, could have been the early source of soluble organic phosphorus available for Earth’s first organisms. 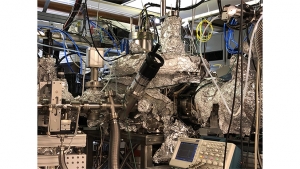 Using sophisticated laser-based detection techniques available at UH’s W.M. Keck Laboratory in Astrochemistry to identify newly formed molecules. The researchers discovered alkylphosphonic acid can be produced in cold extraterrestrial ices that could eventually become incorporated into space debris such as meteorites and comets that fall to or impact on Earth. That path for the alkyl phosphonic acid then became available for the first life on Earth. This is a key discovery as it connects the prebiotic origin of the element phosphorus back billions of years to ice in deep space. “It also provides a critical component for understanding the origin of life,” collaborator Cornelia Meinert (University of Nice, France).

The researchers’ work investigates how alkyl phosphonic acids formed in icy space environments in deep space. They created extraterrestrial model ice using phosphine, water and methane—all molecules that have been detected in deep space—and subjected the ice to conditions that replicate the temperatures and energy exposures in cold molecular clouds.

Long ago, meteorites and other space material such as comet impact would have brought these alkyl phosphonic acids to Earth, making them available during the emergence of life on proto Earth. Perhaps these compounds were an intermediate step toward more complex biologically-relevant molecules that were created in the absence of life.

“The present experiments critically advance our understanding how the only organophosphorus molecules detected in meteorites this far can be formed in deep space, thus constraining the molecular complexity of alkylphosphonic acids synthesized in low temperature extraterrestrial ices,” said Turner.

Kaiser added, “The identification of alkylphosphonic acids in the present study suggests that even more complex phosphorus-bearing biorelevant molecules linked to the origin of life might be formed in interstellar ices.”