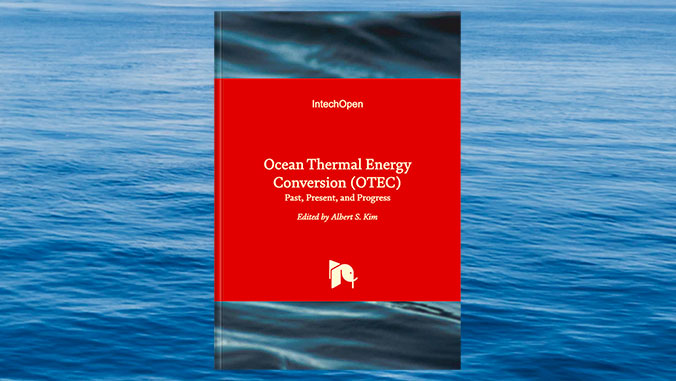 A new University of Hawaiʻi at Mānoa book addresses worldwide achievements and developments in ocean thermal energy. Edited by civil and environmental engineering Professor Albert Kim, Ocean Thermal Energy Conversion (OTEC): Past, Present, and Progress dares the reader to consider how the world can advance the utilization of ocean resources given that the 21st century has been characterized as an era of natural resource depletion.

“As renewable energy production becomes more and more important, I believe that OTEC should be re-evaluated for us to decide to keep going or stop,” Kim said. “Things that inspired me are a community responsibility and the future generation. If we don’t do anything now, Hawaiʻi might not be paradise anymore several decades later.”

Kim said that OTEC systems require a temperature difference of more than 20 degrees celsius to power a turbine. The warmer surface water is pumped to a vacuum chamber and then evaporated generating wind to rotate the turbine. The vapor then gets sent to a condenser and becomes nothing but pure water. Experts said that tropical climates, including Hawaiʻi and other Pacific islands, are best suited for OTEC since the ocean surfaces have a high enough average temperature.

If we don’t do anything now, Hawaiʻi might not be paradise anymore several decades later.
—Albert Kim

Kim said OTEC only has approximately 100 active international researchers, and in past years, interest has been dwindling. Therefore, Kim edited a new book using the latest technical and socioeconomic information, including its problem of finance since OTEC requires billions of dollars to initially install a plant of decent capacity.

OTEC is just one of the technologies that Kim is suggesting to implement as natural resource depletion is causing humanity to be faced with several threats due to the lack of food, energy and water. He believes that in the 21st century, engineering optimization of pre-existing solutions by a holistic understanding of human needs will become as important as specific breakthroughs in future technology.

“Not only due to COVID-19, but also due to various changes, Hawaiʻi needs more strategic plans and interconnected implementation in terms of food, energy and water production and consumption,” Kim said.