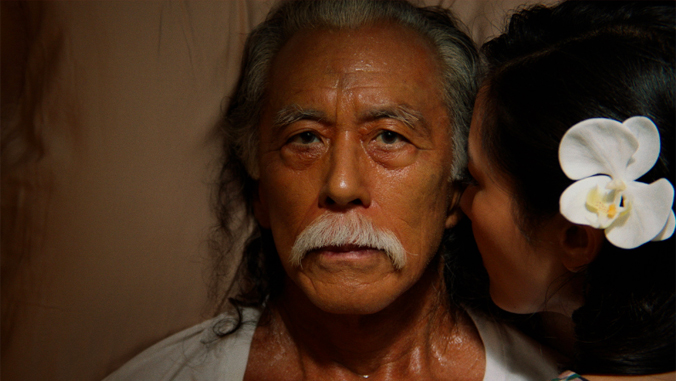 One of the most prestigious and highly competitive international film festivals will premiere a feature film by a University of Hawaiʻi at Mānoa alumnus. Christopher Makoto Yogi’s I Was a Simple Man will premiere at the Sundance Film Festival on January 29. The film is among 10 dramatic narrative feature films in the U.S. Dramatic Competition.

The film, set on Oʻahu’s North Shore, follows the life of Masao from pre-World War II, to Hawaiʻi’s statehood, then the urbanization of Honolulu. When Masao gets older, he develops a terminal illness. As his condition deteriorates, he is visited by memories and ghosts of his past, including his wife (Grace) played by actress Constance Wu. The film illustrates the past and present of one family’s connection to their patriarch.

“I Was a Simple Man is a film that’s really inspired by my personal experience of death in the family, and the emotions and the feelings that I had of being in the room with family members who were passing away,” said Yogi, the film’s director and screenwriter. “It’s a film that’s really inspired by family stories that I’ve heard over the years, fictionalized things that I’ve come up with on my own, and the spirit that I feel of Hawaiʻi when I’m there.”

Yogi first came up with the idea for the film more than a decade ago. Since then, he’s been writing and developing the script, raising money and developing himself as a filmmaker.

“To know that it has a birthdate, now know that it’s about to be released out into the world is kind of unreal,” Yogi said. “I have both a real excitement that people will finally be able to see the film and at the same time, there’s this unknown now and I’m just taking it like ‘whatever happens, happens.’”

Yogi said there were several UH alumni and Academy for Creative Media (ACM) Mānoa majors who worked on the film’s production.

“Filmed on Oʻahu, with a mix of filmmakers and community members including ones from multiple generations of our growing ACM Mānoa ʻohana, we think that this project was able to provide opportunities for connection and a welcoming platform to step up,” said Anne Misawa, co-producer on the film and associate professor at ACM Mānoa.

Yogi graduated from UH Mānoa in 2005 with a degree in English and went on to earn a graduate film degree from the University of Southern California in 2009. He was in the first ACM production class in 2004. Yogi said his time in the UH Mānoa ACM program was an important part of his development as a filmmaker.

“I feel like more of my filmmaking DNA was formed in the time at the University of Hawaiʻi,” Yogi said. “It really instilled in me this mission to really explore and have a curiosity for stories, set in my home, and go back to that as a creative seed. I’m just very grateful for the ACM, not only for my experiences, but because so much of it was also intertwined with the making of this film, with the other crew members.”

Yogi’s previous feature film, August at Akiko’s, was named one of the best films of 2019 by The New Yorker film critic Richard Brody. The film, which was shot on Hawaiʻi Island, premiered at the 2018 International Film Festival Rotterdam and was shown at several other festivals around the world. Yogi hopes to embark on a similar tour with I Was a Simple Man.