A team of researchers from the University of Hawaiʻi at Mānoa and Northwestern University has developed a skin-mounted sticker for diagnosing cystic fibrosis, one of the most common life-shortening genetic disorders. The novel wearable device absorbs sweat and then provides a simple, accurate diagnosis within minutes using a color changing sensor. 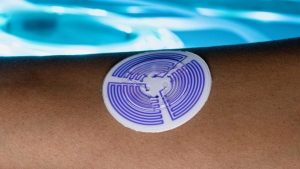 The concentration of chloride in sweat is the most robust biomarker for a positive diagnosis of cystic fibrosis. The current method uses a hard, rigid, wrist-strapped device. The research team—with lead author Tyler Ray, an assistant professor in UH Mānoa’s Department of Mechanical Engineering in the College of Engineering—developed the soft, flexible, skin-like “sweat sticker” in sharp contrast to the current diagnostic technology. It softly adheres to the body using a gentle, skin-safe adhesive. This results in direct contact with the skin that is both comfortable and imperceptible to the wearer. This intimate, gentle contact enables the sticker to collect 33% more sweat than the current clinical method, and the high volume ensures that one test will consistently provide a sufficient sample for an accurate diagnostic result.

The sticker also incorporates built-in colorimetric sensors that detect and measure the chloride concentration using a smartphone camera in real-time. This integrated analytical capability eliminates the need for expensive laboratory equipment and lengthy, emotionally-challenging wait times. This opens the possibility for testing in locations lacking access to certified cystic fibrosis testing facilities, as is the case for most Hawaiʻi residents.

“The use of a soft, gentle, skin-safe adhesive allows us to interface with the fragile skin of a newborn without risk of harm. The formation of a watertight seal enables collection from the skin with near perfect efficiency, removing the need for repeated testing” Ray said. “We’re very excited about the opportunity to eliminate a delay in diagnosis by analyzing sweat chloride on the device via a smartphone.”

The research and study findings were published on March 31 as the featured cover article in the journal Science Translational Medicine. Ray is the paper’s lead author and biointegrated electronics pioneer John A. Rogers is the senior author. Rogers is the Louis Simpson and Kimberly Querrey Professor of Materials Science and Engineering, Biomedical Engineering and Neurological Surgery in the McCormick School of Engineering and Feinberg School of Medicine, and the director of the Querrey Simpson Institute for Bioelectronics. Study co-author Susanna McColley, a cystic fibrosis expert and pediatric pulmonologist at Lurie Children’s Hospital and Northwestern Medicine, was the clinical lead for the pilot validation study.

The toll of cystic fibrosis

Cystic fibrosis affects one out of every 3,300 births in the U.S. and a total of 70,000 people worldwide. Individuals with cystic fibrosis experience a wide range of symptoms including chronic pulmonary infection, loss of lung function and pancreatic insufficiency. Treatment plans are extremely complex, making an early diagnosis and management of its progression essential for patients.

In the U.S., all newborns are screened for cystic fibrosis within the first few days of life through a heel prick. If that screen is abnormal, pediatricians order a sweat test to confirm the diagnosis. During the sweat test, the baby must wear the hard, wrist-strapped device for up to 30 minutes. Sometimes smaller and younger babies have trouble producing enough sweat for the test. Other times, the loose, ill-fitting sweat-collection device is unable to collect a large enough sample. In these instances, the baby must repeat the test at a later date, inducing anxiety and delaying treatment.

“Not only is there a risk with the current sweat testing technology to collect an insufficient volume of sweat to analyze, the analysis time itself can be lengthy for the patients—typically on the order of hours,” Ray said. “Right now, the device used in clinical tests only offers a means of collection, not analysis of the sweat chloride concentration while being worn.”

Those who suffer from cystic fibrosis receive treatment from one of two specialists in the state. One of the specialists, Edward Fong, John A. Burns School of Medicine (JABSOM) associate clinical professor, and pediatric pulmonologist and cystic fibrosis physician for Hawaiʻi Pacific Health Medical Group, reported, “Although civilian patients receive a diagnosis of cystic fibrosis in Hawaiʻi based on sweat conductivity and genetic testing, it is only considered a preliminary diagnosis. In order to be officially recognized by the Cystic Fibrosis Foundation as having cystic fibrosis, families must travel to the U.S. mainland at their own expense to receive the confirmatory sweat chloride testing.”

The other specialist, Timothy Beaty, JABSOM assistant clinical professor, and pediatric pulmonologist and cystic fibrosis physician for Hawaiʻi Pacific Health Medical Group said, “Treatment success depends largely on early diagnosis. Our goal is to start therapies as early as two weeks of age in order to improve growth and prevent further organ damage. It is imperative we have a rapid, accurate and accessible test to confirm cystic fibrosis diagnosis.”

Ray began his research developing the “sweat sticker” as a postdoctoral researcher at Northwestern University prior to joining the faculty at UH Mānoa. Ray was recruited as the first faculty hire in the College of Engineering in the field of biomedical engineering, a rapidly growing area of study that represents the nexus between engineering and health. This project exemplifies how this interdisciplinary field is of critical focus for addressing societal-level health concerns.

To help foster a closer connection with JABSOM, Ray has since joined the Center of Biomedical Research Excellence in Diabetes at JABSOM as a junior investigator. He seeks to apply this diagnostic sweat-testing platform to help promote the metabolic health of the people of Hawaiʻi and the Pacific region.